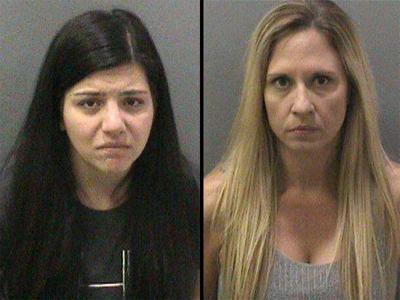 UPDATE: Former California high school teachers Melody Lippert and Michelle Ghirelli have pleaded guilty to having sex with a 17-year-old student during their drug and sex filled party on the beach last January (2015.) Michelle Ghirelli also pleaded guilty to a felony count of furnishing a controlled substance. While neither of the women will face jail time, Lipper and Ghirelli will both be sentenced to three years probation. Lippert will also have to perform 15 days of community service while Ghirelli will serve 180 days in a lock-down rehab facility. The prosecution said that even though the women won't face jail time they will receive a much bigger punishment which is having their teaching credentials revoked for life in the state of California. Original story follows...

Melody Lippert and Michelle Ghirelli, teachers at South Hills High School in West Covina, California were arrested this past January 2015 for allegedly throwing wild alcohol-filled sex parties on the beach with their students. Kinda wish we hadn't gotten that GED so could re-enroll!

The parties started taking place originally back in November of 2014 on beaches in Orange County, CA (no, we aren't talking about a TV show here folks, this is real life! And a really good one at that! Well, until they got caught.)

The events started with Lippert (38 -- not too bad! Pictured right) who took students to the beach, gave them alcohol and allegedly engaged in a sexual relationship with one of them, according to {modal http://www.people.com/article/California-teachers-arrested-beach-sex-students}reports{/modal}. Later she set up a second trip, this time inviting her dear colleague Michelle Ghirelli (30 -- now we're talking!) at which time both teachers allegedly had sex with students. This must be a new sort of "sex-ed", right? Perhaps it was homework? Or maybe it was extra credit! Whatever it was, teenage boys all over the world are pretty damn jealous right now!

The charges against the two range from conspiracy and contributing to the delinquency of a minor, to unlawful sex with a minor. However for some reason they weren't charged with giving these students a proper education, which I'm sure they did! Shame on the Orange County Police Department. Couldn't they better spend their time arresting some housewives, like the cops in Jersey!

Apparently this particular High School is used to these sorts of stories. There was another arrest this past month of a part-time wrestling coach for alleged "inappropriate contact" with a 17-year-old. There must be some new moves in H.S. wrestling. Next thing you know the band teacher is going to be taking the students to the beach and they'll be calling it "Sax On The Beach".

While we of course realize this sort of behavior is unacceptable for the teacher-student relationship, all we have to say is that after spending all those years waiting for high school to be over, we must say, we can't wait to get back in!