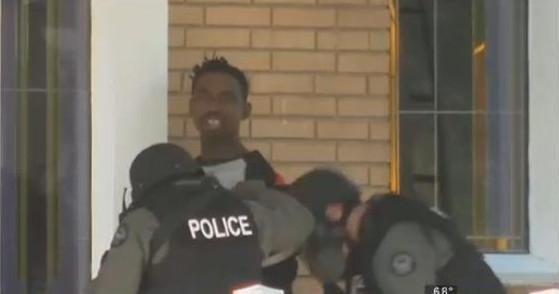 Curtis Ward, the would-be actor and con-director behind a critically acclaimed thug documentary, was arrested over the weekend following a standoff with police at a funeral service for his grandfather. This bad actor was acting badly, and when SWAT arrived it was the final act for him.

Ward — who also goes by the name Curtis Snow — was placed behind bars on Saturday after he barricaded himself in a women’s restroom at the Higher Ground Empowerment Chruch located in a neighborhood of Atlanta, GA. And no, he didn't "identify" as a woman. Maybe he figured the male cops couldn't get in without the right birth certificate.

The star of the documentary “Snow on tha Bluff” took cover in the restroom when he learned police had showed up at the funeral parlor. Authorities were called to the service concerning a “person armed” but authorities did not find any weapons. So why was he arrested? Well for one he was in the ladies room. And for another he had an outstanding warrant for aggravated assault.

Streets around the church were temporarily closed off during the standoff. and the SWAT team finally took Ward out of the bathroom he had locked himself in three hours later after using tear gas. What a mess.

Ward broke out in 2011 for his documentary, which chronicled the life of a drug dealer in a crime-ridden area of Atlanta. His character stole a camera from college students and depicted daily moments in his life, from using drugs to stealing off other drug dealers. Nice. Glorify that shit why don't ya. In real life, Ward has been in and out of jail several times on drug-related charges. Seems like this mook can't tell the difference.

The amateur film captured the attention of actor Michael K. Williams, who is best known for playing Omar on HBO’s hit “The Wire.” After Williams signed on as executive producer, the film was repackaged for and distributed to streaming giants like Netflix and Amazon in 2012. Maybe he should grab a GoPro and finish the story now that he is finally hauled off to the slammer. Get a long shot when the cops throw away the key please.