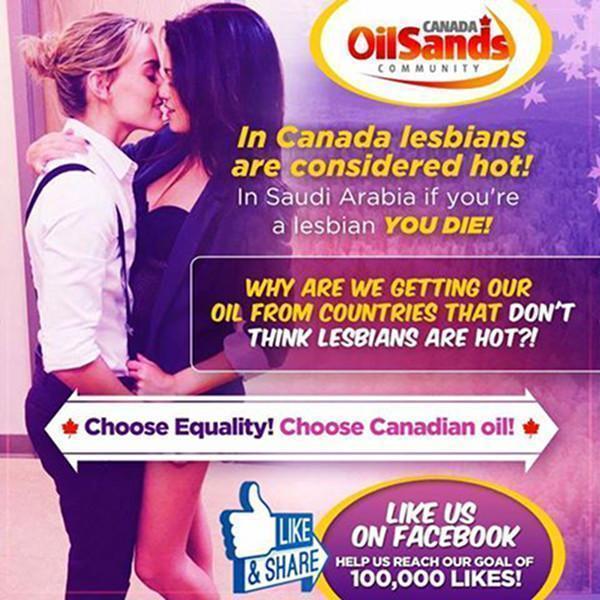 Whether lesbians are hot... or not... doesn't really matter. (We think they're hot, but nobody's asking us.) What matters is that a Canadian oil advocacy group's effort to promote Canadian oil has gotten them into hot water. And no amount of Canadian oil will soothe that burning sensation when the internet opens fire.

A Facebook post that showed an intimate moment between two women — one “femme,” the other “stem”— has been taken down by the administrator of a group that pushes for Canadians to use home-produced oil over foreign imports. And when the moderator defended the image by citing his own gay lifestyle, it only made matters worse.

Social media can be unforgiving. Well maybe not quite as unforgiving as the governement of an oppressive country that puts people to death for their sexual orientation. But its rough out there on Facebook and Twitter. And it doesn't matter if you are gay yourself... don't be calling lesbians hot... or you'll make them really hot and they'll burn your ass. And you know how important your ass is if you are gay.

Wow, this whole article is all so unpolitically correct... or politcally incorrect... or something. But that's why it's a frickin riot. Dead lesbians in Saudi Arabia are mostly ignored while twitter blows up if you call a hot looking lesbian... well, hot. We gotta stop doin' this or we'll get ourselves into trouble. Yeah, like we care. Trump gets into trouble for sayin' stuff all the time and simply gets more press. Maybe that'll happen to us.