Rick Perry Indicted, You Know What That Smells Like? 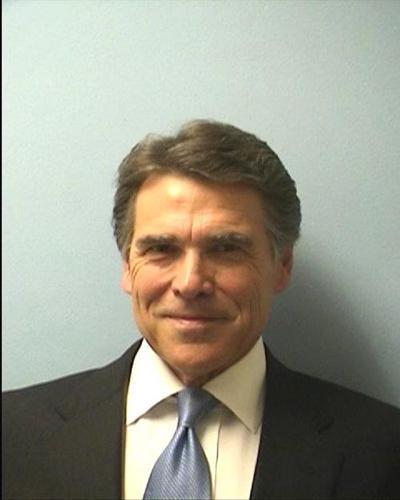 Smells like a pile of bullshit. But here's the story, Rick Perry was indicted by a Travis County grand jury on August 15, 2014. The first charge was abuse of official capacity, for threatening to veto $7.5 million in funding for a Public Integrity Unit (a first degree felony.) What the hell oxymoron is a Public Integrity Unit?

The second charge was coercion of a public servant, a third degree felony. Perry was seeking the resignation of Travis County DA Rosemary Lehmberg (a Democrat), after she was convicted of drunk driving and incarcerated. Guess he wasn't able to get a hat trick. Wasn't the first time Perry was 2 for 3.

On August 19, 2014 Perry turned himself in at the Travis County Justice Center where he was processed, finger printed and photographed for his first-ever mug shot! We wonder if any officers snapped a selfie with the Governor when he was processed. He was later released, plead not guilty and waived arraignment. As of now the case is still working its way through the system. At least Perry will be able to say "I got indicted and all I got was this stinking picture!". For the better we suppose.

The charges were met with opposition on both sides of the political spectrum, but it seems Perry received a rise in favorability among Republicans after the incident.

And just to reiterate....