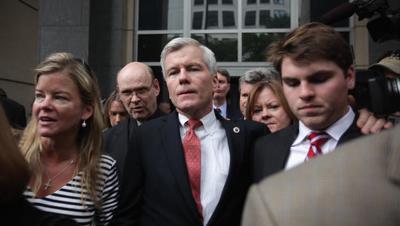 After having been found guilty on September 4, 2015 on charges of public corruption, former Virginia Governor Robert McDonnell has finally been sentenced.  On January 6, 2015 he was ordered to serve two years in federal prison.

This whole ordeal started back in January of 2014 when McDonnell and his wife were indicted on federal corruption charges. This had followed a months-long federal investigation into gifts McDonnell received from a political donor. We suppose these gifts are reported in some way. Otherwise, why would have the feds have even begun an investigation into gifts a Governor with an "exemplary public life" had received? Or maybe someone ratted him out. Ha!

After a 5 week trial and 3 days of jury deliberation, McDonnell and his wife were found guilty on 11 of the 13 charges filed against them centered around trading access to the power of the governor's office. McDonnell was guilty of receiving more than $165,000 in loans and other high-end gifts. For a public official, that's a big no-no. What it boils down to is another trusted representative of the people giving in to the temptation of greed. Although Mrs. McDonnell had been found guilty as well, it's still not clear as to what her fate will be. However it seems that she may even be getting off without any punishment. Nobody voted for her, but the vote on her sentencing will come in February.

McDonnell's supporters (apparently hundreds of them) had tried their best to plead for sentencing leniency for the former Republican Governor. Former Congressman from Virginia, Eric Cantor had said that McDonnell's legacy should not be marred by one mistake. Well, not one mistake -- 165,000 or so mistakes, but who's counting! Two years in prison and 2 years of supervised release actually does seem pretty lenient though, considering McDonnell was facing as much as 10 to 12 years behind bars. He of course voiced his strong faith in Jesus Christ and blames Him, errr... we mean thanks Him, for such a short sentence.

McDonnell publicly acknowledged that he is "a sinner with many, many human frailties". We can't help but wonder, and perhaps even worry, about what his time in prison will be like. McDonnell strongly opposed gay marriage and advocated a state constitutional amendment defining marriage as a bond between one man and one woman. Did anyone mention to him that where he's going it's something referred to as federal "pound me in the ass" prison? Don't drop the soap, you greedy bastard. Not even Jesus can save you then.