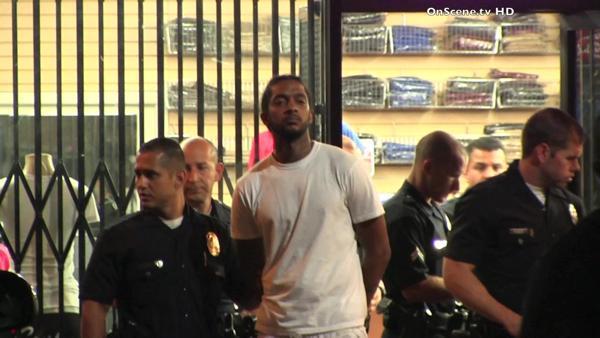 On June 24, 2015 Rapper Nipsey Hussle (aka Ermias Asghedom) was arrested after a bottle of codeine was found in his car during a routine traffic stop. Apparently he didn't have a scrip with that bottle so off to jail he went. Looks like Nipsey won't be getting so tipsy from that codeine after all.

Police stopped the 29-year-old rapper on "suspicion" of traffic violations late Wednesday night. These damn routine traffic stops are leaving more and more rappers and other celebrities finding themselves in trouble with the law (think Rick Ross and Professional Boxer Mike Alvarado just to name a few.) Turns out Hussle had an outstanding warrant for driving with a suspended license, and at that point our friends, the party was over.

The police requested to make a search of the car and with his consent the treasure hunt began. Police found a bottle of codeine without a prescription label as well as a soft drink and cup of a ice. All ingredients that police say are "used to make a highly potent drink". Right, because any "potent drink" needs ice, no one else would want to have a cold beverage! But in all seriousness codeine is often mixed with soft drinks, specifically that of Arizona Iced Tea to create what many call "lean". All the ingredients together do make for a "potent" beverage.

As we mentioned earlier, no prescription was produced by Hussle and he was arrested on suspicion of possessing a controlled substance, as well as for his outstanding warrant. Usually Hussle is known for his "outstanding" performances, this time it's his warrant. He was released a short time later after posting $1,000 bail. This rappers pervious run-in with the law was last August (2014) when he was arrested on a misdemeanor charge of obstructing a police officer -- whatever that means.

The career of Nipsey Hussle started in 2005 and has been taking off ever since. He probably thought he would just "lean" back and enjoy the ride, but for someone who hasn't had too much trouble with the law, he better stay out of trouble from now on.

(The image above is from his arrest in August of 2014 at Hyde Park in Los Angeles, CA.)