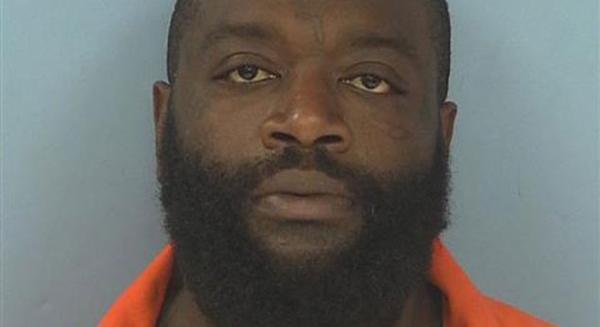 On June 24, 2015 Rapper Rick Ross (aka William Roberts) was arrested on charges of kidnapping and assault. Allegedly Ross forced a man into a guesthouse at his suburban-Atlanta estate. He allegedly proceeded to beat the man with a handgun (good thing he didn't shoot him), chipping his teeth and mangling his jaw so badly that the victim was unable to chew food. Well, all we can say is "bottoms up!"

Ross was taken into custody without bail and officially charged with kidnapping, aggravated assault and aggravated battery. The kidnapping charge always gets us. While the guy was obviously taken against his will and held in a private location is that all the law needs for "kidnapping?" What... no ransom? We guess it's an easy way to stack on the charges. Ross' bodyguard Nadrian James also faces kidnapping and aggravated battery charges. Along with taking quite a beating the man was "questioned under duress and forced to answer questions at gunpoint". What was next - waterboarding? At least it doesn't sound as bad as Gitmo.

Unfortunately we still don't know what led to the attack or what sort of relationship exists between Ross, his bodyguard and the victim. Just like those two guys we have lots of questions... we're just not prepared to kidnap them and beat the answers out of them. We'll wait for the courts to take care of that.

Athough the incident had originally occurred on June 7th, Ross and his bodyguard weren't arrested until the end of June. Police showed up at his mansion where someone inside refused to open the gate leading to the home. In the words of the police "They refused to open the gate, so we opened the gate for them" -- booya! Classic... the cops took care of the joke for us. However once inside Ross and his bodyguard were taken without a struggle.

Luck hasn't been on Ross' side in recent times. On June 10, 2015 just two weeks prior to this recent arrest he was also arrested in Fayette County after a "routine traffic" stop. The cop stopped him because he noticed the windows of Ross' Bentley violated tinting regulations. We're beginning to think that's what the tint job is actually called by the body shop -- "Illegal Tinting!" Yeah... let's get the Illegal Tinting special and not draw attention to ourselves in a $200,000 car! Lo and behold at the time of the arrest the officer smelled marijuana coming from the car and even found a small amount. Ross was booked into county jail on a misdemeanor charge of marijuana possession but was released from jail later than night.

Like all Rappers, Ross has had his run-ins with the law in the past, with charges ranging from drug and gun possession, to assault and battery. But did you know Ross was once on the other side of the law? That's right, in the mid-1990s Ross worked as a correctional officer at a Miami prison. Who said you can never go home?

Ross' career started around 2001 and he has enjoyed much success since then including a hit single in 2010 that he is particular known for "Aston Martin Music". That's probably how he got to drive a Bentley. Perhaps it was about time an incident like this happened to really get his career rolling again... and no, we don't mean "Rick Rolling."