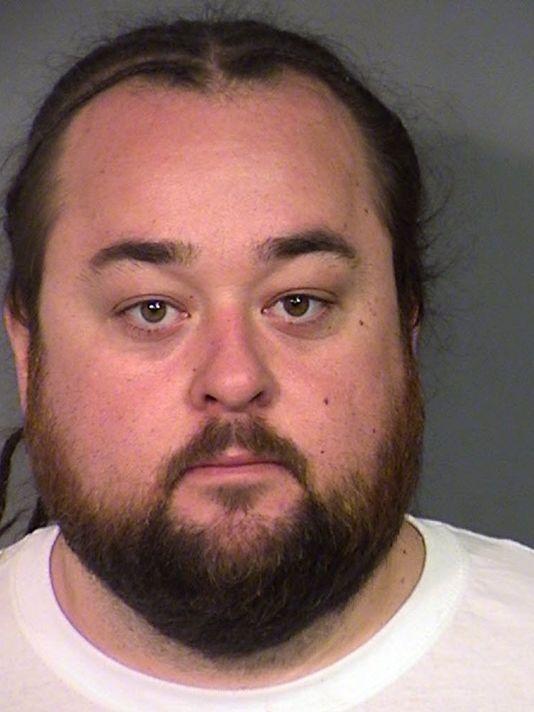 UPDATE May 23, 2016 -  The star of the reality show "Pawn Stars" is taking a plea deal that could spare him jail time in a case stemming from the discovery of guns, marijuana and other drugs at his Las Vegas home. Austin Lee Russell, aka "Chumlee", told a judge today that he intends to plead guilty to a felony weapon charge and a misdemeanor count of attempted drug possession. The agreement will get him counseling and three years' probation. He returns to court again in June.... stay tuned!

Here is the original story:

Seems the 33-year old Russell was a person of interest in a sexual assault investigation. When the cops arrived at his home to execute a search warrant on that matter, they ended up running into Chum's stash of marijuana and methamphetamine. And oh yeah at least one gun. You think Chumlee was taking his work home?

So they bust him on felony drug and weapons charges, not on the original (and still alleged) sex-crime.A department spokesman said that the sexual assault investigation stemmed from a recent complaint by a woman, and that it is continuing. So this ain't quite over for the Chump... uh... we mean Chumlee.

Bail was set at $62,000. Maybe Rick Harrison, owner of the Gold & Silver Pawn Shop where the reality show takes place ought to be called in to negotiate. "The best I could do is $25,000 your honor." And of course the usual experts can be brought in as well. What about Rick Dale of Rick's Restorations... to restore Chumlee's destroyed career?

On the series, Chumlee portrays a character who is a lovable dummy, but that persona is out the window. Now he's not just playing a dummy... he is a dummy... a big fat dummy. Well, maybe not the fat part, considering his recent weight loss. Maybe he can claim he was on the meth diet. For weight loss that's the strongest thing you can get without a prescription! Here's the real reality. With a net worth estimated at $5 million and a job that paid a cool $25,000 per episode, only an idiot would risk a sexual assault allegation, traffic in drugs and have illegal weapons at home.

Right now the A&E Network, the History Channel and his colleagues at the Pawn Shop have limited their comments so far. But the situation cannot be good and may in fact may get worse if more evidence is discovered or sexual assault charges are piled on. Into Rehab will be holding the ticket on this one...