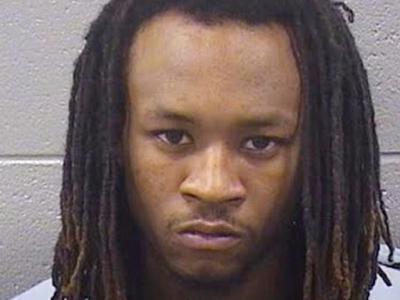 Now, as for the charges? Reckless discharge is perhaps another way of saying someone pissed this guy off and he went for his gun and got careless. Or perhaps he was out for revenge, shot, and was really, wildly off. So much so that it was simply regarded as "reckless". Or not. With rappers you never know. Maybe he was high,,, ya think?

Whatever. Anyway, we're pretty sure this Class 4 Felony is no small crime. Punishment varies anything from 1-3 years in state prison, to community service, to probation and/or a maximum fine of up to $25,000. What we are having a hard time figuring out is why his bail was reportedly set at $400,000 -- Dayum! Hope he's selling lots of records of slinging a lot dope. Perhaps the Judge realized what was really going on and decided that it wasn't as "reckless" as the police made it out to be in their report.

Lil Jay, for those that don't know him, is from Chicago, and is part of the Fly Boy Gang (FGB) rap group -- among a number of other rap groups, movements, gangs ... you get the picture. Lil Jay is apparently a veteran when it comes to crime and gun violence. He's rapped about having been shot 10 times in total --- We're sure this makes his mother proud. While it was difficult to determine how many times he's been arrested there appears to be a number of mug shots floating around online (aside from the one above.) He had recently undergone surgery for none other than to remove bullets from his body. One tough kid.