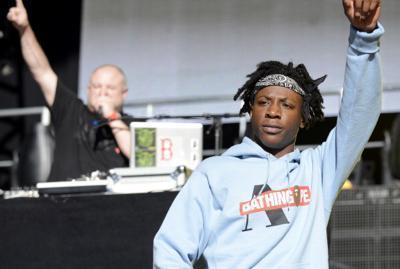 Joey Bada$$ (a member of the Pro Era rap collective) was arrested on January 2, 2015 after allegedly punching a security guard in Australia at one of his concerts. The uppercut from down under!

As Bada$$ (guess that's what we'll call him) was about to take the stage he was apparently stopped by a security guard who asked to see his "credentials". We suppose at such an event with rented security it would be difficult for them to know exactly who the performer is... ya think? Whatever the reason, Bada$$ didn't appreciate this and punched the security guard in the face, breaking his nose. Damn! We did mention he is a "badass" right?

The security guard appeared to sustain other facial injuries and was later taken to a local hospital. But, as they say, the show must go on! Bada$$ was only arrested after the show was over. He spent the night in jail and appeared in Court Saturday morning where he was granted bail. However he's due back in court on March 19, 2015 on a charge of assault. That's right, another trip to the down under. Enjoy the 56 hour plane ride, or however long it takes.

New developments have come to light which suggest there may be another side to this story. Over at Complex where this story was reported, a comment was left by a person named "Donn". He offered the following narrative of what perhaps really went down:

"Someone has an album coming out...

Guard: Hey how ya doing, may I see your ID?
Manager: Joey just punch him, we need this press for your album!
Joey Bada$$: He's kinda big though
Manager: It doesn't matter, we'll just pay them to say you broke his nose
Joey Bada$$: alright then fuck it"

Another comment from someone named "The Truth" was: "He needs all the publicity he can get because his album is about to flop super duper hard."

Ouch! And things get even crazier... with timing that seems just too perfect. On January 5, 2015 The Verge reported on what might be the "first leaked Instagram from the Obama family". Seen in the picture is what appears to be Malia Obama. The oldest first-daughter is sporting a Pro Era t-shirt -- the Brooklyn-based rap collective that Joey Bada$$ is part of. We're not saying anything, merely just pointing this out. Although the photo hasn't been confirmed, it sure does have a striking resemblance to Malia Obama.

Well... you know the old show-biz expression... "Don't care what you say about me... just spell my name right." That's Bada$$ with two dollar signs!