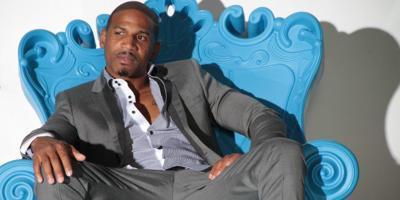 Steven "Stevie J" Jordan, a cast member on VH1's "Love & Hip Hop Atlanta", and award winning record producer, has been ordered into rehab after failing numerous drug tests showing use of both cocaine and marijuana.

Here's the scoop on this noodle-brain: Stevie J was first arrested in June of 2014 for failing to pay more than $1 million in child support (the guy only makes upwards of $27,000 a month you see!) He was released on $25,000 bail (hmmm... so, that's like one month's pay... OK, not too bad.) Although part of the bail agreement did stipulate that he take mandatory drug tests. We don't know why those drug tests were required. But being a super-star in the hip-hop world could make it quite difficult for someone to pass such tests! So guess what? He of course flunked, apparently testing positive for marijuana and cocaine no less than 10 times between June and December! Surprising? Not really.

Anyway, the prosecutor in his case has now demanded that this young man be placed in a 30-day in-patient rehab program. Soooo... (get ready... here it comes...) apparently looking for a little slack Stevie J has now admitted to his drug abuse problems. We don't see how that admission was even needed in light of those failed tests! But of course the next step is really what it was about. In keeping with the usual parade of lame excuses for bad behavior Michael Bellinger, the attorney for Mr. Jordan (as we're sure the judge likes to call him), has subsequently argued that he should not be sent to rehab. Nope. Shouldn't go! You see, the time spent in rehab, Bellinger states, would hinder his client's ability to work and make the money he needs to pay off those debts. Huh? Oh well, perhaps it's a bit too late for that argument! He shouldn't have gotten behind on those payments in the first place... being such a hard working man and making 27 grand a month and all. Sheesh.

So there you have it. Another day and another goofy celebrity story of wretched excess at Into Rehab (if you consider fake reality TV shows a pathway to celebrity!) Here are some words of advice Stevie J: straighten up your act. And in the future, don't forget to take care of your kids!