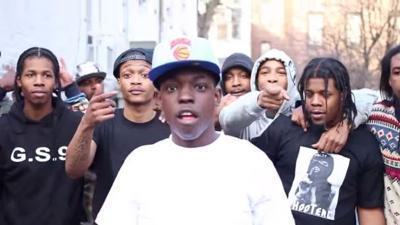 Ackquille Jean Pollard aka Bobby Shmurda, an American rap super-star, was arrested on December 17, 2014 and charged with conspiracy to commit murder, reckless endangerment, and gun possession. Fourteen others were arrested alongside Shmurda with similar charges laid out against them, along with assault and drug dealing as well. Shmurda plead not guilty and was held on $2 million bail. Shmurda... rhymes with murder.

UPDATE: It's been 15 months since his arrest and Bobby Shmurda has claimed the police have it in for him. D'ya think? Bobby's claim in new court docs alleges the cops are out to get him because of his anti-police raps ... adding the very same officers who arrested him in 2014 harassed him and his friends before. The court disagrees and has denied his requests for police disciplinary records. Nice try Bobby.

Police have labled Shmurda as the "driving force" in a gang known as GS9 (also the name of his record label.) The gang had been investigated by police for some time, even before Shmurda rose to fame. It was believed that Shmurda perpetuated the crack dealing and the ongoing battles waged against rival gangs. He faces a maximum sentence of 8-25 years.

The head of the NYPD unit, James Essig, said that Shmurda's songs and music videos were "almost like a real-life documentary of what they were doing on the street." Although let us remind Mr. Essig that we're pretty sure all rap songs are a documentation of what life was like on the streets -- or in some instances what they "wanted" their life to be like on the streets. At least so there would be something to rap about.

Check out the video below of Bobby Shmurda's hit song "Hot N*gga" and we think it'll all make sense.

Bobby claims in new court docs cops have had it out for him because of his anti-police raps ... adding the very same officers who arrested him in 2014 harassed him and his friends before.

Read more from our friends at TMZ: