Fatboy Slim Was In Rehab? 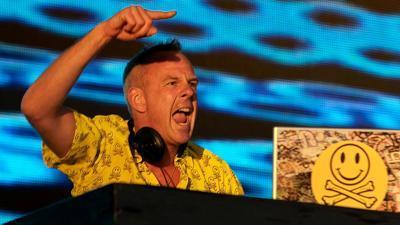 Well... uhh... yes he was! Or should we have said of course! Norman Cook aka Fatboy Slim spent a short 28 days in rehab back in in 2009. But rather than being filled tragedy, this story is in fact uplifting.

Fatboy Slim, for those that don't know, is an electronic music super-star who enjoyed a rapid rise to fame and mainstream popularity in the 1990s. Even though we may think it understandable that someone in the eletronic music world (especially combined with being from England) would struggle with substance abuse, Fatboy Slim has proved himself the exception to the rule.

But it was back on March 4, 2009 that Cook checked into a rehab center (or "centre") in Bournemouth, England to fight a "booze addiction" that he had been battling for "some time". This caused him to miss a performance at a week-long winter sports and music festival held in the Austrian ski resort of Mayrhofen. Now, with nearly six years of being sober under his belt and the possibility of a an upcoming album, things are definitely back on the upswing for Fatboy Slim.

With that said, let us take a moment to remember and celebrate one of the high points in his career, his music-video "Weapon of Choice" (and we all know what his "weapon" of choice used to be...) This video features some amazing dance moves from one of our favorite movie-stars, Christopher Walken (someone in Hollywood who has always managed to stay out of trouble.)