Journey Drummer Deen Castronovo On A Long Journey Back From Rehab 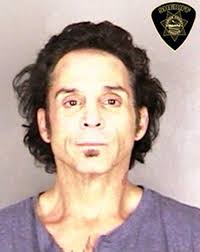 In a recent interview former Journey drummer Deen Castronovo came clean about his arrest and sentencing on domestic violence assault charges, and his recent stint in rehab. Taking a cue from the songs on which he sang lead when he joined the hit group Journey he is looking for "A Better Life" because it's "Never Too Late."

In a brutally frank and open discussion with the Salem Oregon Statesman Journal, Castronovo acknowledged his failures and how he verbally, emotionally and physically abused his former fiance. She eventually called police which led to his arrest in June. That arrest, which also included charges of unlawful use of a weapon and coercion, was the culmination of a 24-day methamphetamine binge. But Castronovo admits it was not the drugs, but his violent nature that was to blame. Somebody take those drum sticks away from this dude!

Castronovo is serving four years of supervised probation which includes domestic violence counseling. Sadly, this is not the first time Castronovo finds himself on the wrong side of the law, having been arrested on similar charges in 2012. And even more tragic is that he was kicked out of Journey over this recent incident and replaced by Omar Hakim who will complete their current tour in the US and Canada. Still, we're pulling for Deen to pull through this. Let's hope this is one journey that he makes for the last time.