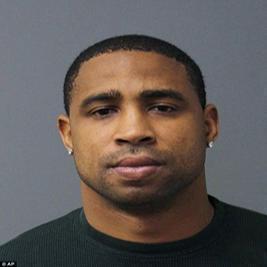 Back in November of 2014, Fred Smoot, former cornerback for the Washington Redskins was arrested and charged with misdemeanor domestic assault. However on January 5, 2015 his ordeal came to an end. The verdict: not guilty!

The whole story started when Smoot's former girlfriend, Valerie Jackson, told police that Smoot had assaulted her at their home in Ashburn, Washington. Uh-oh... a former girlfriend thing? That has got to be a red flag - especially for a football player! Pictures later surfaced on social media that seemed to show some injuries to Jackson's neck, shoulder, and arms. But come on, we all know that pictures after the fact and especially on Instagram, often don't add up to much at all.

Nonetheless, with conflicting allegations and questionable evidence the police arrested and charged Smoot with the misdemeanor offense anyway. When Smoot finally had his day in court on January 5 the trial went pretty quick. How quick? It started Monday morning and ended ... Monday afternoon! Looks like those Instagrams weren't all they were cracked up to be. And apparently the Judge felt the same way, basing his ruling of not guilty on the "he said, she said" nature of the allegations. Pictures... ehhh. Not enough! This bit of nastiness may have been nothing more than a little argument between ex-lovers that simply got out of hand -- but in the end no one was really hurt. Justice served, case closed.

Smoot over the years enjoyed a very nice career in the NFL, playing for nine seasons with the Washington Redskins and the Minnesota Vikings. In his post-NFL career he has gone on to serve as an on-air analyst for Comcast SportsNet. This seems to have been his only run-in with the law. We hope it'll stay that way. He should make this one arrest a moot point.