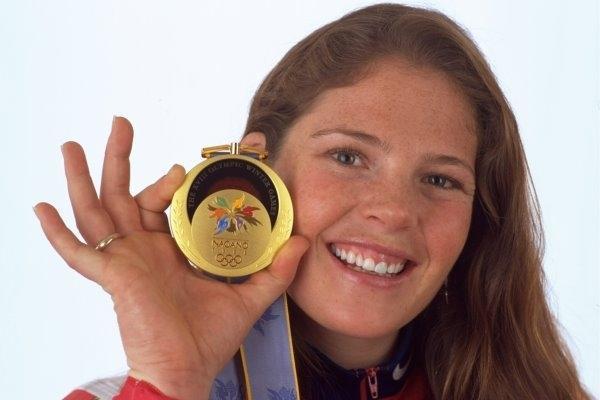 Picabo Street, the talented and admired Olympic Super G and Downhill skiing champion added a new dimension to the term downhill. First, she pushed her 76-year old father down two flights of stairs. Then she saw her life go downhill when she was arrested for multiple counts of domestic violence and assault. Super!

Apparently Picabo and her dad Roland Street got into an argument that escalated. And yes, we are referring to the down escalator, as she allegedly grabbed the old guy by the shoulder and sent him down two flights. The result for dad was cuts and bruises and a possible head injury. Do ya think? As for Picabo, this is no game of hide and seek. She plead not guilty and is due back in court in February.

Into Rehab could not find anythng in her past that would suggest she could ever resort to this kind of bad behavior. In fact it is quite the opposite. Since her days as an Olympian she has had numerous television appearances, endorsement agreements and authored her autobiography.She raises her three kids and splits time between her homes in Alabama and Colorado.

Soooo... with her background, and this being her first incident, we think she'll likely look for some type of plea bargain to make it go away. In the meantime she owes dad and her fans a big fat apology.