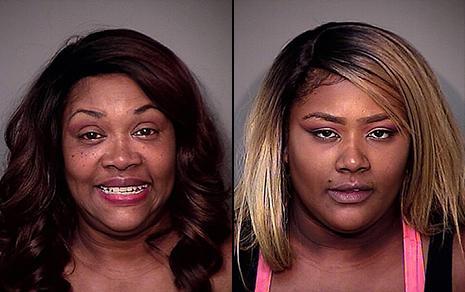 According to a charging affidavit[2], “Tamara” directed the undercover officer to a Motel 6 in Kissimmee. The online ad claimed “Tamara” was 38 and that she hated “the taste of Latex.”

When the officer arrived at the motel Tuesday afternoon, he was greeted at the door by Tanja Gammon, 57, who “was wearing lingerie.” After retrieving a condom from her purse, Gammon pulled the undercover cop’s hand towards her crotch and said, “You got to make sure I don’t have a dick.”

Upon entering the motel room, officers discovered that Gammon’s daughter Darcel, 31, had been inside the locked bathroom. “Darcel was also dressed in lingerie”[4] and it was “clear that she was inside the bathroom listening and looking out for Tanja.”

The Gammons, turning tricks together at the Motel 6, apparently alternated as each other’s lookout and security. As she was being driven to jail, Darcel told an Osceola County Sheriff’s Office deputy that she “knew I was a cop and that I called her first but she knew better than to call back.”

Pictured above, Tanja (left) and Darcel are locked up on prostitution and other charges in the Osceola County jail. Court records list the accused hookers as New Jersey residents. (2 pages)...

Read more from our friends at The Smoking Gun http://www.thesmokinggun.com/documents/crime/mom-daughter-prostitution-team-648731