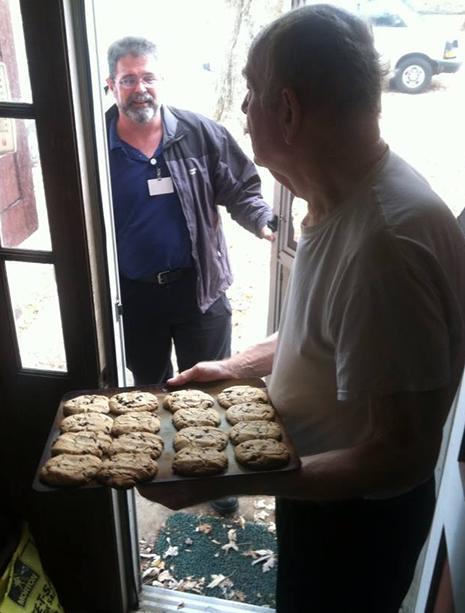 FEBRUARY 2--A 74-year-old man has been charged with distributing chocolate chip cookies laced with hash oil to fellow parishioners at an Indiana church, according to investigators. Police this week announced that misdemeanor charges[1] have been filed against Brian Jones in connection with an incident last year at St. John the Apostle Catholic Church in Bloomington.

Jones is facing two misdemeanor counts: criminal recklessness and possession of hash oil. Jones, who has pleaded not guilty, is scheduled for a February 28 pretrial conference in Monroe Circuit Court.

As detailed in a police report[2], seven individuals fell ill shortly after consuming Jones’s homemade cookies, which he handed out at the conclusion of a 9:15 AM Sunday service. All of the victims, cops noted, sought treatment in the emergency room of a Bloomington hospital, where their symptoms included nausea, lethargy, anxiety, elevated blood pressure, and paranoia.

One parishioner who ate an entire cookie told police that he felt as if he was “having a stroke”[3] and described feeling “like he was dying.” The man told cops that he recently had a triple bypass procedure and worried if “whatever happened today was going to adversely affect his heart.”

Each of the victims identified Jones as the source of the chocolate chip cookies they consumed. Parishioner Heather Weatherbee told police that Jones arrived late for the services, which she called “abnormal.” Weatherbee added that Jones was “walking all over the aisle” and appeared to be “intoxicated or under the influence of some substance.”

When police questioned Jones about the cookies, he denied[4] knowledge of any illegal substances being added to the baked goods. But when officers subsequently executed a search warrant at Jones’s residence, they discovered nine capsules of hash oil[5] inside a pill container found in a bedroom where Jones often slept.

Jones told police that he frequently gave out cookies and brownies at St. John the Apostle, and sometimes baked into the early morning hours before a church service.

In a 2014 Facebook post, one of Jones’s adult children posted a photo (seen below) showing the septuagenarian greeting a visitor to his home with a tray of freshly baked cookies. “At the Jones house, you are greeted with a fresh batch of cookies when you arrive,” the caption notes. “They call my dad ‘the cookie man.’” (4 pages)

Read more from our friends at The Smoking Gun http://thesmokinggun.com/documents/bizarre/the-cookie-man-crumbles-870452