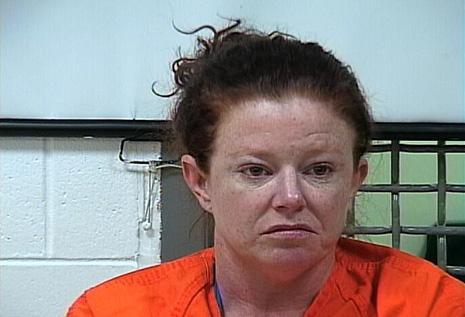 A substitute teacher was arrested yesterday for indecent exposure after she performed a cartwheel in a high school choir class “with no under garments on,” police allege. According to cops, Lacey Sponsler, 34, exposed herself to students last Friday at Pawhuska High School in Pawhuska, a city about 50 miles north of Tulsa.

Sponsler, seen at right, was wearing a long dress, but no underwear, “which caused her to expose herself to the students in this class,” cops allege[1]. “This act was captured by a student on their cell phone,” said Police Chief Scott Laird.

As detailed in a probable cause affidavit[2], as Sponsler (seen above) performed the cartwheel in the “Junior High Choir room,” her dress was “flipped up,” exposing her buttocks. An officer who reviewed the video of the incident added, “I further noticed that the Defendant was not wearing any type of underwear.”

A 17-year-old female student told police that Sponsler “had said that she was not wearing underwear before performing the cartwheel,” which exposed her “bare vagina.” The student noted that she saw Sponsler’s “vagina open and close, as her legs were in the air.” The girl also told police that Sponsler “had been talking about using drugs” and commented on how she “thought fourteen year old boys were like men.”

Sponsler told police that she was “just dancing with the students” and "trying to be a cool teacher."[3]

According to court records, Sponsler pleaded guilty in 2008 to marijuana possession, public intoxication, and possession of drug paraphernalia (for which she received a two-year deferred sentence, was fined $1100, and was ordered to perform 100 hours of community service). In December 2009, a judge ruled that Sponsler violated her probation, in part because she had not disclosed being questioned by police investigating an accused meth cook. Sponsler told cops that she had been present in the suspect’s home when he was manufacturing the drug, adding that the man was “careless when he cooks.”

In September 2011, Sponsler pleaded guilty to possession of methamphetamine and marijuana in the presence of a child and possession of drug paraphernalia. She was sentenced to a three-year deferred sentence. As part of that plea deal, prosecutors dropped a burglary charge against Sponsler, who is pictured below in a mug shot snapped yesterday.

Read more from our friends at The Smoking Gun http://www.thesmokinggun.com/buster/indecent-exposure/cartwheel-exposure-572938