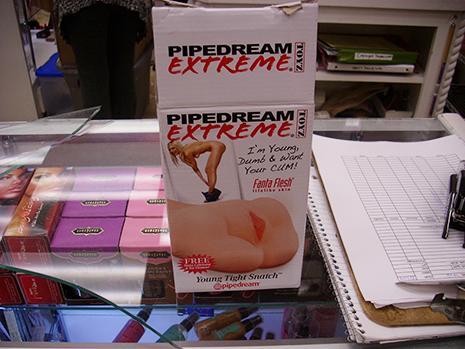 An Arkansas man suspected of robbing an adult novelty store was arrested after a stolen sex toy fell out of his pocket as he was approached by a police officer. Andrew Bell, 30, entered the Seductions store in Fayetteville around 9 PM Wednesday and browsed for about 30 minutes before a worker spotted him walking into a back room “attempting to get out of the sight of the employee,” He was playing hide the salami... really!

When the worker entered the back room, she spotted Bell “closing a pocket knife with an adult sex toy in his jacket.” When the employee asked Bell to return the item, cops say, he “refused and reopened his pocket knife” and began advancing on the worker.

Bell was briefly locked in the store by the employee, but after he menaced another customer, shattered a glass countertop with his fists, and began kicking the front door, the worker unlocked the door.

Within minutes, a Fayetteville cop spotted a man matching the robber’s description walking a few blocks from Seductions. As the officer pulled his vehicle in front of the suspect, “an adult sex toy fell from behind him to the ground.”[2] The suspect, later identified as Bell, had blood on both his hands and “a club sticking out of his sleeve.” A knife was also found in the front pocket of Bell’s jeans.

After a Seductions worker identified Bell as the suspect, he was arrested for aggravated robbery, aggravated assault, theft, and criminal mischief. Bell, locked up in the Washington County jail, is scheduled for a court hearing this afternoon.

The police report notes that an “Adult sex toy with smeared blood” was seized as evidence.

A police photo (seen above) of the box Bell allegedly left behind in Seductions shows that the stolen sex toy was a “handheld masturbator” that retails for about $15. According to Pipedream Extreme, the item’s manufacturer, the product--known as the "Young Tight Snatch"--features “life-like fleshy lips and velvety warm insides, it feels just like the real thing.” Additionally, users are instructed to “glide the warm sleeve up and down your pleasure rod and enjoy the welcoming cling of super-soft Fanta Flesh.”

Read more from our friends at The Smoking Gun http://www.thesmokinggun.com/documents/crime/cops-snatch-adult-toy-thief-184027