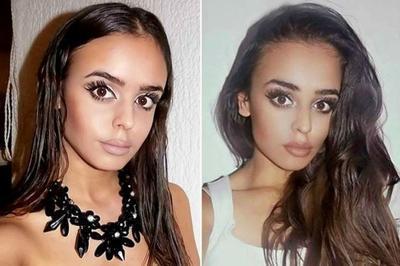 At the beginning of February 2015 Croatian model Sara Grkovic (can you pronounce it please?) was arrested after allegedly stabbing her twin sister with a kitchen knife. Now why would she do such a thing? Apparently it happened during an argument over the love of a man they both admired. Lucky guy... yeah... lucky he wasn't there!

Oh boy! Well, literally, that handsome gentleman must really be something special. Twin sisters! And one is a "model"? (Why not both?) Normally we would hesitate to put a model in our "Rest of Us" category. We mean, a model really isn't your typical person (or maybe she is in this case?) Whatever it might be, the sister, Dajana Grkovic (again, pronunciation please?) was taken to the hospital with wounds to her chest and thigh and is said to be in stable condition.

Well... at least we'll be able to tell them apart now. Dajana has the scars and Sara has the arrest record. Sara was charged with one count of inflicting grievous bodily harm, and 2 counts of being a stupid jealous bitch (okay, that last charge was made up.)