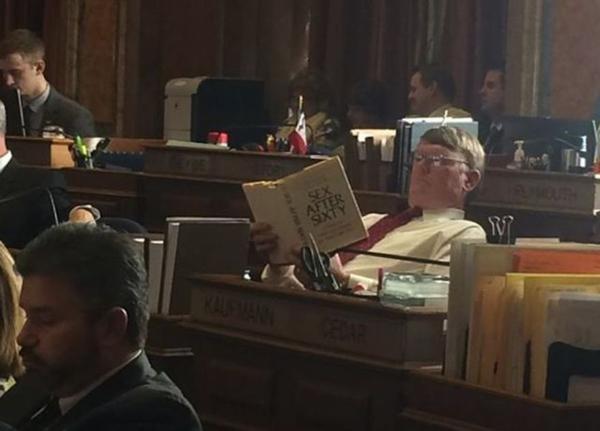 In March of 2015 Iowa State Rep. Ross Paustian was caught reading 'Sex After Sixty" on the House floor. He later apologized for the incident but not before a photograph went viral. High five to Brianne Pfannenstiel of the Des Moines Register who took the picture! And, Mr. Paustian, so, how's the sex?

So the story is like this: Mr. Paustian (or maybe we should call him Chief Boot Knockin'?) just turned 59 in March and apparently this book was some sort of gag gift given to fellow Republican state Rep. Rob Bacon who had just turned 60. The book was "making the rounds" on the House floor when Mr. Paustian became the poor sucker to have been spotted reading from the book.  How unfortunate, huh? He didn't just want to admit that he was getting warmed up? Can someone please see how old his wife is, maybe he was doing some research?

Mr. Paustian has been quoted as saying, "The main thing is I was totally engaged in what was going on on the floor. … I knew what was going on. I knew how we were going to vote on amendments. So it wasn't like I wasn't paying attention to what was going on." And by the looks of that viral image you looked pretty engaged in that book. We guess he knows now all the sexual positions that he didn't think were possible after 60!

What we find strange is why this book was making "the rounds" during a House session. Couldn't it have waited until a lunch or coffee break? We guess everyone, including Rep. Ross Paustian just wanted a quickie. Does the book talk about that? 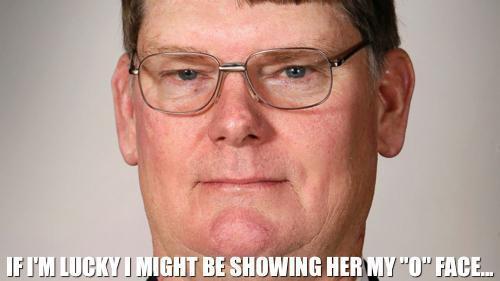