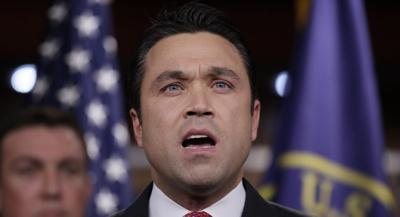 UPDATE: Former Congressman, Michael Grimm, has been sentenced to 8 months in jail for tax fraud. And well, life definitely couldn't be more "Grim" for this guy. He did his best to plead for the mercy of the court but the judge didn't buy it saying to Grimm, "Your moral compass needs some reorientation." And that our friends, is what Rikers is for, or at least whichever country club prison he'll be going to. Original story follows...

This Tuesday December 23, 2014 Rep. Michael Grimm (R-NY) plead guilty to felony tax evasion -- ZING! Who once was the bad-ass of Congress, threatening to kill a reporter, is now taking the walk of shame with his tail between his legs.

As part of a plea bargain Grimm admitted to under-reporting more than $900,000 of revenue from his health food store, "Healthalicious", over a four year period, as well as filing false tax returns based on that under-reported income. He also admitted to using that under-reported revenue to pay expenses in his restaurant, as well as to make payments to his employees off the books. Grimm managed to escape other charges based on his plea bargain. However he did admit to two lesser offenses: hiring people ineligible to work in the US; and lying in a 2013 deposition. Whoa! You mean there is a politician out there who lies under oath and cheats on his taxes? Nahh, couldn't be! Anyway... sentencing is to take place in June of 2015, Grimm could face up to 30 months in prison.

Michael Grimm is definitely no stranger to controversy or illegal activity. A woman by the name of Diana Durand was arrested by the FBI in January 2014 and charged with illegally donating more than $10,000 to Grimm's 2010 election campaign. Durand was also charged with lying to federal agents about the matter. However, in that bunch of bad business, Grimm denied any wrongdoing. In the end (September 2014) Durand pleaded guilty to making the illegal contributions to Grimm's 2010 campaign. Well, we know money talks... looks like it testifies as well!

Now, let's all remember what happened when an innocent reporter, Michael Scotto, tried to ask Rep. Grimm about the matter. Grimm refused to answer questions. Then, when he (likely) thought the camera was off, Grimm threatened to throw the reporter Scotto off the "fucking balcony" and break him in half -- "like a boy". Oh boy! Ya remember? Maybe this will jog your memory. Check out the video that follows -- it's a classic! Of course Grimm later apologized (a big fat juicy one too!)

(This is not the only example of Grimm's combative nature and "Brooklyn-style." Check out the other videos at the end of the article -- we think his continued bad behavior will all make sense then!)

Many questions have now been raised about Grimm's future in the House. While he doesn't automatically forfeit his seat upon a felony conviction, he would still be restricted from voting. So what does he do... just sit around and watch? Although there is understandable pressure on both sides for him to resign, Grimm has said that he would not give up his seat (even though at one point he did say, "if I were put into a position where I could not serve, I would step down.") We say blah-blah-blah.

We suppose the timing of this whole sordid affair is just right... you know... just in time for the holidays. Merry Xmas Michael! Although Grimm still enjoys one small advantage -- it happened after winning the election. Rep. Grimm is single, without children and lives in Staten Island. And for now, he's still a Congressman. So ladies, get ready. Any day he might be moving to Rikers. And there he won't be single for long!