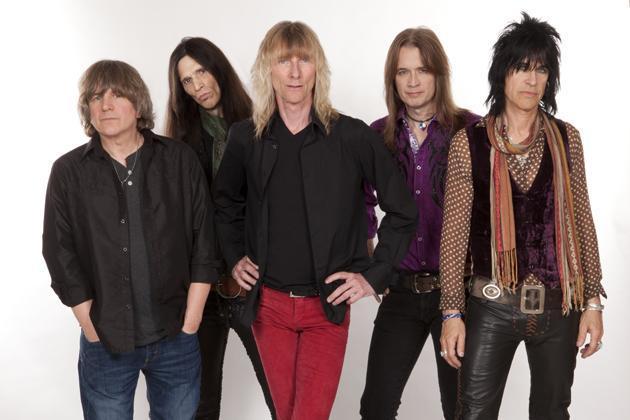 Veteran rockers Kix have revealed the details of a shocking incident where their guitarist Ronnie Younkins failed to show up for a gig. He remained out of touch until the following morning when he was finally found "not in great condition and very upset.” Lucky he didn't get kicked out of Kix right there. Now Youkins is gonna have to kick his habit as he heads Into Rehab.

Younkins has a history of alcohol abuse and had previously spent time in rehab before. So that's two habits... booze and rehab. And now off he goes again! That's him second from the left with his held tilted looking like he might fall over. No... he just fell off the wagon.

Anyway, in a news update, the band has just revealed that the guitarist is heading back to rehab and they will be without his services (or his drama) for a while. They thanked their fans for their support and further announced that Brian “Damage” Forsythe will help fill the void on guitar until Younkins can return. Apparently the damage to the band's rep done by Youkins blowing off his gig responsibilities was not enough, so they've added more damage... errr... so to speak. Ah crap. Anyway... here is the required uplifting message to fans:

"To all our fans: Thank you for your concern about our dear friend Ronnie. Our hearts and prayers go out to him and his family, and we wish him the best on his continued journey toward recovery. As we all well know, the road to recovery is not easy, but with the support of family, friends, and fans too, this difficult time becomes just a little easier to manage. Ronnie is currently headed to a rehab facility and will be in good hands. Brian will once again fill Ronnie’s shoes until Ronnie is ready to return to KIX, to his side of the stage, which is waiting for him. See you soon... Brian, Jimmy, Steve and Mark"

Kix have tour dates scattered throughout a good portion of the year. Once again, the band has made arrangements to fulfill the dates while Younkins receives treatment. Once again? Hmmmm... this is getting to be quite a habit... better keep Brian's number fellas..