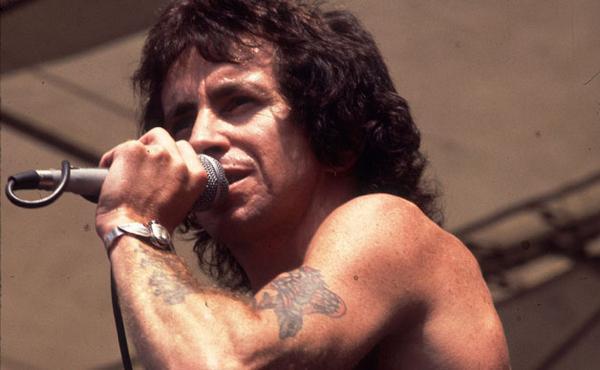 Scott spent his growing up years in western Australia, where he learned to play drums. At age 15 his true colors began to emerge as he spent time in juvie for giving the cops a false name and address, escaping custody, stealing gas and having "unlawful carnal knowledge" (we can only assume what that means).

He was then rejected by the army for being socially inept. Go figure. After many different bands (including The Valentines), Bon Scott formed Fraternity and found a measure of success. During this time he also found his voice and learned some guitar.

However, after a drunken fight with a fellow band mate, Scott took off on his motorcycle and wrecked (first appearance on the highway to hell perhaps?). After a three-day coma and almost a month in the hospital, Bon took on small jobs for his former fellow band member Vince Lovegrove and was introduced to AC/DC, who needed a new front man. He felt maybe they were too young and without enough experience to rock, they felt Scott was too old to rock. Well, hells bells, weren't we lucky they decided to jam anyways?

Bon's ex-wife, Irene Thornton, has stated that after his accident Bon's voice changed into that gravelly growl we all know so well. She believes that was what made him the legend he has grown to be. A drunken crash made him a rich rock legend. We don't recommend it, but we are glad it worked for Bon Scott.

The ensuing years give us an obvious look at how AC/DC had no problems with heavy partying and telling us like it is. But again, Irene says Bon actually had an old-fashioned, soft side few ever saw.

After success with albums like High Voltage, Dirty Deeds Done Dirt Cheap, Let There Be Rock, Powerage and finally their most successful, Highway to Hell (produced by "Mutt" Lange), it was obvious AC/DC was a name to be reckoned with.

In February of 1980, Scott was working with the Young brothers for a couple of the songs on the upcoming Back in Black album. A few days later, Bon spent the night doing some heavy partying and passed out in a friend's car. He was found dead the next morning. Some say he died from aspirating vomit, though the official cause was listed as acute alcohol poisoning.

Of course AC/DC lived on with new front man Brian Johnson. They released Back in Black and dedicated it to Scott. It has become the fourth best selling-album in history.

Scott now has a street (ACDC Lane) in Australia and a festival (Bonfest) in Scotland. He has only grown in fame since his death and was inducted into the Rock and Roll Hall of Fame in 2003. High schools around the country play AC/DC riffs to this day. Countless musicians continue to honor him with their music.

In 2006, at a service in Scotland remembering Bon, Vince Lovegrove had this message:

"The thing I loved most about Bon Scott was his almost unique self honesty. What you saw was what you got, he was a real person and as honest as the day is long."