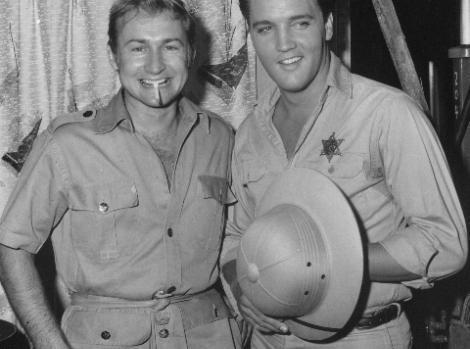 In 1968 and at the age of 36, actor Nick Adams joined the ranks of celebrities to face early death. Though his work didn't foster the same legacy as his dear friends Elvis Presley and James Dean, he too died from drug overdose. He played a rebel, he was a rebel and he died a rebel.

At 17 Nick entered a fateful audition during his first visit to New York City. He met Jack Palance, Marlon Brando's understudy. They felt an immediate kinship, and Jack introduced Nick to some people "in the business." Nick spent the next year defying words of discouragement and doing lots of unpaid theater work. But, Nick wanted more. He wanted to go where the money was: film. So, he hitchhiked to Los Angeles to seek fame and notoriety.

As many do, he found the movie business to be quite a struggle, When he finally started getting film gigs, his roles were minuscule or uncredited. Somewhat discouraged, in 1952, he enlisted in the United States Coast Guard. As it turns out maybe that was just what his career needed. Nick returned to Hollywood two years later and scored a big time Warner Brothers agent at the age of 23. This led him to an array of supporting roles in major Hollywood films, including a small role in Rebel Without a Cause starring James Dean.

Nick was excited to be working with Dean; they had met several years earlier on a soda commercial. Nick and James clicked instantly (starting to notice a pattern?) and they became a comedic duo amongst their buddies. But when James Dean died, Nick tried to capitalize on his death. He posed for "contemplative" photographs at his grave, and claimed that a James Dean fangirl was stalking him.

Let's give Nick the benefit of the doubt and say that he took advantage of his dead superstar friend to cope with his grief. With James gone, Nick needed a new famous BFF. He chose Elvis Presley, whom he met on the set of Love Me Tender. They enjoyed hanging out late into the night in the company of prescription medication. Nick published an account of their friendship that brought him some more notoriety.

Hm, okay, maybe it's a little more calculated than just a coping mechanism... In time Nick got married, had two kids, and got divorced. Along the way, he found some success in television including a hit series on ABC where he played Johnny Yuma - The Rebel.

Sadly, his successes never seemed enough to satisfy his rebel spirit. He was found dead on February 7, 1968 from an overdose of various sedatives. Nick was never "known" for a drug problem, but several bottles of prescription meds were found in his cabinets. To this day, there is debate over whether it was a suicide, accident, or even murder. Whatever the true story is, his reunion on the other side with James and Elvis was probably pretty awkward. Three great men who shared one thing... three wasted lives.