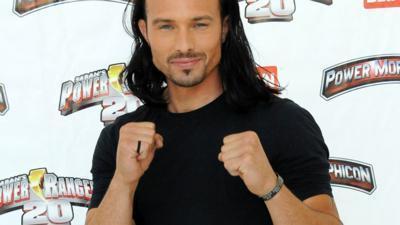 You are probably thinking stabbed with a what?! That's right, even we can't believe it. Poor guy didn't know what was coming, but I guess he should have known after becoming the roommate of a former Power Ranger. Logic would tell you Medina was either really good with a sword, or really pissed off that he had such a shitty career. Did anyone ever see this guy's face until now? Wasn't he wearing that funny mask most of the time?

The fatal stabbing took place after an argument turned into a fight (great {modal http://www.usatoday.com/story/life/people/2015/02/02/power-ranger-actor-arrested/22729399/}reporting{/modal} on that one!) According to Medina's side of the story (remember the other guy is dead) he retreated back to his bedroom and only stabbed his roommate after his roommate forced his way through the door. What we don't understand was why this guy kept a sword (of all weapons) by his bedroom door in the first place?

Medina was the one to call the cops and waited for authorities to arrive. Right, call it self defense, call 911, wait for the authorities. All the right ingredients. Medina's agent apparently hasn't been returning any phone calls, which is surprising since this is probably the most number of calls this agent has received about this poor guy... well, ever!

Listen to the lyrics to the theme song of Power Rangers and you'll find this story even more funny!

UPDATE: At this time no charges will be brought. But that hasn't been ruled out entirely according to the D.A.'s office and an investigation will be carried out.