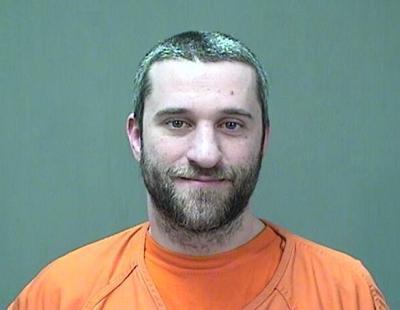 At his hearing Diamond "sincerely apologized" to everyone involved saying, "This was the single most terrifying experience of my life ... This is all I've been able to think about for the last six months." And we're sure it'll be the only thing on his mind during these next 4 months in jail...Then nicely in the back of his mind during the 15 month probation and then *poof* all gone! Diamond is rumored to be "well endowed" -- not sure if that's good or bad for him in jail but only time will tell. Original story follows...

On December 26, 2014 in the early morning, Dustin Diamond aka "Screech" from the hit show Saved By The Bell was arrested after an apparent bar fight in Wisconsin.

According to Police, Diamond and his girlfriend (or according to some accounts his wife) got into a fight with another group at the Grand Ave. Saloon. Diamond allegedly stabbed another man and left the scene with his girlfriend. He was later tracked down by police and taken into custody. Diamond has been charged with use of a dangerous weapon, carrying a concealed weapon, and recklessly endangering safety. Diamond made his court appearance on Friday Dec 26th in the afternoon and has had his bail set at $10,000.

The man Diamond stabbed did not sustain any life threatening injuries and is recovering at home. Which tells us that Diamond is apparently not such a good fighter. Especially when considering the guy went home and he went to jail.

Diamond is of course best known for his role as Samuel "Screech" Powers on the hit television show, Saved by the Bell. Diamond played this role for all 13 years of the shows existence through it's numerous incarnations. Starting as Good Morning, Miss Bliss, on to Saved by the Bell and into Saved by the Bell: The New class and  Saved by the Bell: The College Years. However apparently nothing could save this guy's career as things seemed to slow down after that. Aside from a few cameo appearances in films over the years and a role in a "partial animated sci-fi comedy" called Hamlet A.D.D. (yeah, pretty bad!) Diamond has been making the rounds on the Celebrity Realty TV shows. He was on Celebrity Fit Club, Hulk Hogan's Celebrity Championship Wrestling, and Celebrity Big Brother. As we have said many times before, an appearance on these types of shows is usually a sign that points to "the end of the road" for someone's career.

In what was most likely a failed attempt to put himself back in the limelight and gain some credibility, Diamond authored a book in 2009 called, Behind the Bell. The title obviously speaks for itself but in the book Diamond painted a rather unflattering portrait of his co-stars. Many of his colleagues continue to refute and deny what was written.