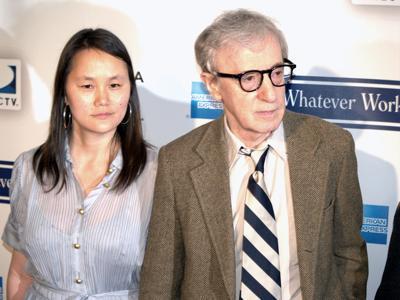 December 1st, is the birthday of the always funny Woody Allen. While such a famous person may need no introduction, we'd like to take this opportunity to look back on some of his more infamous "bad behavior".

Back around 1980 Allen began a relationship with actress Mia Farrow. Although the two never actually married, and they kept separate homes, their relationship lasted twelve years until 1992. In Hollywood terms that is pretty close to forever! That was about the time Farrow discovered nude photographs that Allen had taken of Soon-Yi Previn, Farrow's adopted daughter who was just 20 years old at the time.

Describing the situation in such a round-about way -- separate homes, never married, "adopted daughter", "nude photos", bla-bla-bla -- all a very nice way of saying Allen was banging the step-daughter. Although of legal age (the relationship supposedly started when she was 19 and he was 56) it was still built on uneven ground, whether she was truly his "step-daughter" or not. So no matter how you do the math, it all adds up to being something really strange! Allen and his teenage paramour eventually married in 1997 and apparently have been happy ever since. Well who wouldn't be with a daughter... err... we mean a wife, young enough to be your daughter!

This whole sordid affair wasn't the only time Allen has run into controversy. Read more about this character {modal http://en.wikipedia.org/wiki/Woody_Allen#Children}here{/modal}.

We wonder if the two love-birds will be celebrating Allen's birthday at Chuck-E-Cheese. Anyone still got coins to play some games there? Happy Birthday Mr. Konigsberg!