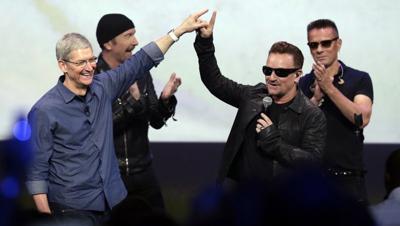 At the announcement of the iPhone 6 this past year we were told that U2's latest album, Songs of Innocence (maybe should have been called Songs of Apologies), would be available to download for free on iTunes. However, some iTunes users found that the album was automatically downloaded onto their device. *Delete*.

Bono did at first apologize for this... but in the end he is taking the apology back. He says, "...I'm very proud of what we did. It's one of the proudest moments in U2's history."

We guess another proud moment in U2 history was when Bono finger-banged Tim Cook on stage at the Apple event. Remember that? Or that time...well... we can't find anything else. This guy is pretty squeaky-clean. But hey Bono, we got you on our radar. Just don't forget, no one listens to U2 anymore!

Here's one guy who already figured that out, "Siri, delete this piece of Sh*t now!"