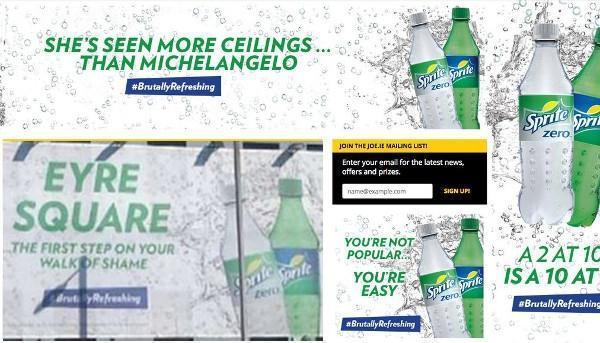 The corporate world once again ends up bashing its own questionable reputation when like a bunch of little frat boys they try to appeal to the basest instincts of their target audience. Claiming it was “celebrating those with guts to tell it like it is" the ad campaign included lines like “She’s seen more ceilings than Michelangelo,” “You’re not popular... you’re easy,” “A 2 at 10 is a 10 at 2,” and other blatantly degrading digs at women. This kind of crap is universally criticized as “slut-shaming,” a misogynistic practice stemming out of a patriarchal society. We'll simplify it for you. These guys are assholes and have been "asshole-shamed" into admitting it and apologizing.

Of course the apology came quickly with the usual "this ain't us bullshit: “Since its introduction in Ireland, Sprite has been associated with individuality and self-expression and we have always been committed to ensuring we deliver the highest standard of advertising,” the spokesperson said. “We recognize that on this particular occasion the content did not meet this standard and we apologize. The campaign has now come to an end and the advert in question will not appear again.” Same thing should happen to the careers of the morons who created this garbage in the first place.

The ads ran in Ireland, and Irish radio presenter Louise McSharry — with 14,900 followers on Twitter — played an important role in drawing attention to the controversial campaign. Message to the boys at Coca-Cola... a little advice... don't mess with girls who have radio shows and thousands of twitter followers! Just sayin'!