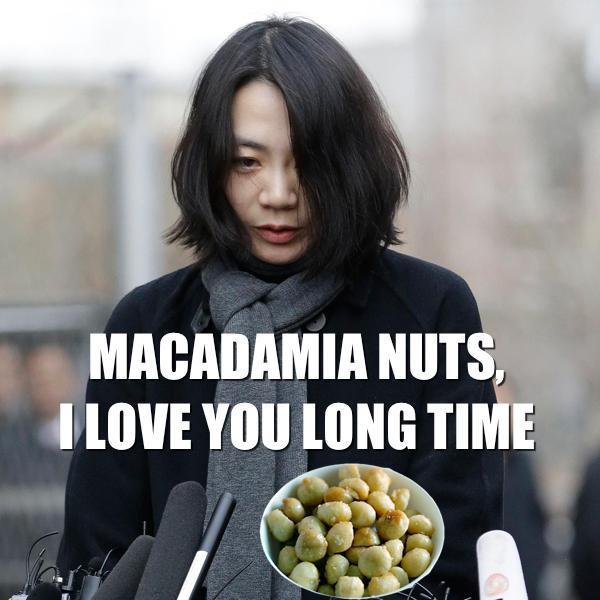 Cho Hyun-ah, also known as Heather Cho, has been found guilty in a Seoul court on a number of charges, including forcing a flight to change its route (the most serious), obstructing the flight's captain, and forcing crew member off a plane.  We can't decide if this case was nuts, or she's just a nut case.

The question is not, where do we begin, the question is, where don't we begin! This story is almost too good! Cho, who is the former vice-president of Korean Air Lines (and daughter of course of the Chairman -- nepotism anyone?) was pushed into the spotlight after some not so savory behavior that took place on a flight back in December of 2014. To start things off Cho had forced a US bound flight from South Korea to return to its gate. Then she forced a flight attendant off the plane because of the way she had served her those "savory" macadamia nuts. That's right folks, paper or plastic? Neither! She wanted her nuts served to her on a silver platter, or well, at least a plate. Did we say the flight was leaving South Korea, because this sounds more like North Korea with that sorry behavior!

Prosecutors launched an "investigation" (sounds serious, huh?) into this "nut rage" case and Cho. The result? She was later arrested and put on trial. At the trial it came out that Cho apparently treated the workers like "slaves" (ya think?) In the end Cho was found guilty on a number of charges (see above) and has been sentenced to a year in prison -- where there won't be any macadamia nuts... not even peanuts!

On a positive note, good thing it was only nuts she was bothered with and wasn't ordering coffee (like the guys in the video below.) Things could have gotten a lot worse!