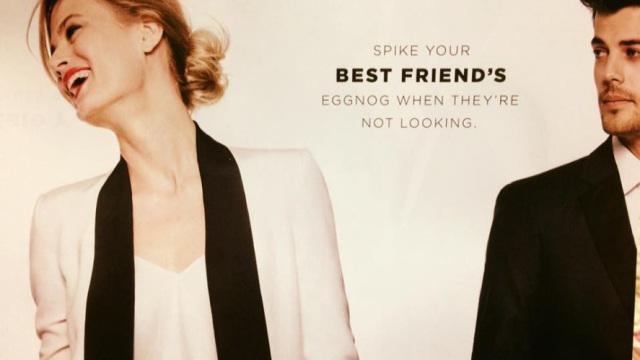 What were the ad copy guys at Bloomingdale's thinking when they dropped this bomb that on the surface seems to promote date-rape! Yikes! (If you don't see this atrocity above click the read more link.)

Bloomingdale’s, that iconic New York department store, was shamed into apolgizing for the ad you see above that appeared in its holiday catalog. Many have found the image and copy to be offensive. The text of the ad reads, “Spike your best friend’s eggnog when they’re not looking,” and is positioned on a page between a man and a woman. The woman is looking away from the man as he glares at her. Wonder what was in his mind, One responder on twitter pointed out that sexually assaulting your best friend is not a great Xmas gift. We can hear the loudspeaker in the store now... "Rape-kit needed in aisle 5!"

Pictures of the ad were circulated on social media and users immediately criticized Bloomingdale’s for promoting date-rape. Bloomie's response was to tweet out their apology. Look for this flap to continue. The PC crowd just loves these gaffes.