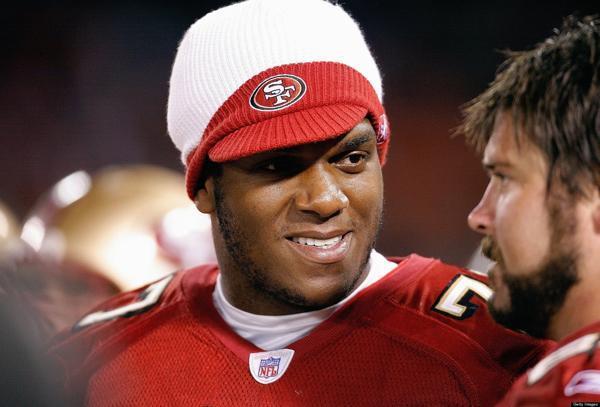 The former 49ers and Raiders offensive tackle, Kwame Harris, was arrested earlier this month (April 2015) after being accused of driving under the influence and attempting to bite a police officer. I guess you could say this gives a whole new meaning to "taking a bite out of crime"!

It's been reported that Harris had been involved in two hit-and-run crashes while under the influence of drugs. However he eventually "crashed" and fell asleep in his own vehicle. It was when police officers responded to someone who thought that Harris needed assistance that he put on his Mike Tyson face and tried to bite the arresting officer. Another "taking a bite of crime" joke? Nah, we'll lay off of that for now. Harris was "eventually" subdued according to reports. However we can't imagine how hard it could have been. We mean, he's not like some piranha or dangerous snake.

In the end the charges added up to DUI, hit-and-run, aggravated assault on an officer, and resisting a police officer. Oh and he was also accused of thinking the officer's hand was a donut.

Harris is no stranger though to run-ins with the law. In 2013 he was sentenced to five days in jail for a misdemeanor domestic violence conviction. However we don't know if any teeth were involved then.

Harris also gained a bit of "fame" after outing himself as a homosexual during an interview with CNN. Very few professional sports players come out as gay after retiring and even fewer if any do when actually playing. The truth is we could make more teeth jokes, but we're gonna stop right here.

Instagram has apologized for promoting diet content to users recovering from eating disorders. A "mistake" in the algorithm meant that when going to ...
... Read more ...

Will the Nevada per se law for THC be repealed?

The state's DUI laws currently prohibit a driver from operating a motor vehicle with any detectable level of marijuana or a marijuana metabolite present in ...
... Read more ...

Fort Worth police chief apologizes to widow after department mistakenly detained her, raided her ...

FORT WORTH, Texas — Nelda Price received something Wednesday that she's been waiting more than a year for, a handshake, and an apology from ...
... Read more ...