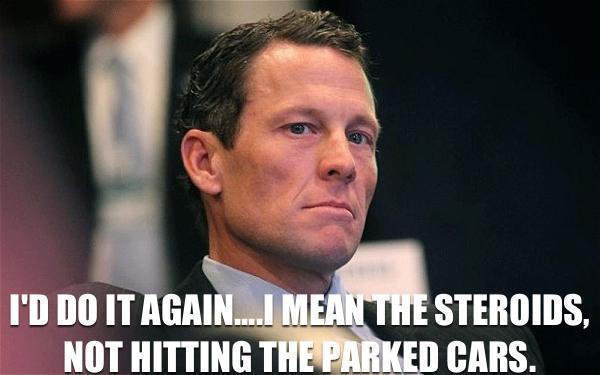 This past February 2015, Lance Armstrong kept himself out of court by pleading guilty to careless driving. The charges came after Armstrong hit two parked cars in December 2014 while driving his SUV in Aspen, Colorado. We gotta ask, was his SUV on steroids, or is Armstrong such a really bad driver that he managed to hit not one, but two parked cars.

Prosecutors say that before the embattled cyclist entered his plea -- by mail -- his girlfriend had originally tried to take the blame. But as Armstrong has clearly learned the truth will set you free, even if you send it in by mail to avoid any court appearance. Apparently two other charges were dropped as part of the plea deal, one being failure to report an accident. Failing to report is something Armstrong is definitely familiar with. The second was for speeding too fast for the present conditions. Whoa, going to fast, Armstrong also knows a bit about that one as well!

Armstrong's girlfriend who originally tried to take the blame was doing so to protect her boyfriend. You see, Lance has had a pretty rough time in the media after it was confirmed that he had lied about using performance enhancing drugs for years. He went from hero to goat as the governing body of world cycling stripped him of every one of one his record seven Tour de France titles. Perhaps this was Armstrong's revenge -- trying to strip some paint off of those parked cars.

With his automobile driving skills so bad, maybe Armstrong should consider riding a bike instead of an SUV? Only this time around maybe a nice tricycle instead. C'mon. Does anybody really feel bad for this guy anymore? We sure don't! Oh yeah and we were quite embarrassed (based on Armstrong's past) to have to file this article under "Athletes", but hey, "the rest of us" aren't driving around Aspen in a fancy SUV.

Instagram has apologized for promoting diet content to users recovering from eating disorders. A "mistake" in the algorithm meant that when going to ...
... Read more ...