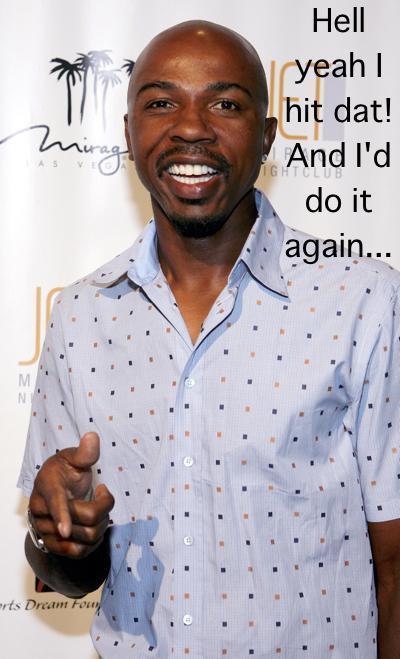 Greg Anthony, a basketball analyst for CBS and former NBA player, was arrested on January 16, 2015 and charged with solicitation of a prostitute. That was Greg Anthony... but his new nickname will be John.

The whole thing went down (well, really I guess only the prostitute was the one "going down") in a DoubleTree Hotel in downtown Washington DC just before 6 pm. We guess this was the appetizer? Or perhaps they were skipping dinner altogether. The Hotel is actually only less than a mile away from the White House but that doesn't matter too much as Anthony apparently helped campaign for Mitt Romney in the 2012 presidential election. The DoubleTree might sound a little "second class" but don't forget, it's really called the "DoubleTree by Hilton". However we don't think this will lead to any prospects of our boy "John" becoming a spokesman for the Hilton hotels. Which anyway would have been pretty good job since Anthony has now been suspended indefinitely ("WTF???" you say....Yes, indefinitely! For trying to have a good time!) from his job as a CBS basketball analyst. Maybe he could find work going room-to-room at the Holiday Inn offering play-by-play commentary on whatever may be going down there.

The poor guy of course came out already with a big fat apology to his "wife, family, and colleagues". The usual "I made a mistake, want to regain your trust, I'm sorry" bullshit. The only thing he is probably sorry about is that he got caught!

It's been {modal http://www.huffingtonpost.com/2015/01/17/greg-anthony-arrested_n_6492274.html}reported{/modal} that Anthony was suspected of using a computer as part of the alleged "crime" and that his arrest was part of some big undercover operation. We suppose this means he was using the computer to find the prostitute. Huh, where? On Craigslist??? Yeah, have you seen what those girls look like! We don't suppose he was using the computer to video the encounter or take pictures. If so, someone should remind him those built-in cameras on laptops have really low resolution. Not so ideal for taking videos of sex acts in a low lit hotel room -- not that we would know anything about that!

Anthony enjoyed a pretty crappy career in the NBA and was described as being a "poor outside shooter" but did have an excellent defense. He played for the New York Knicks as well as the Vancouver Grizzlies. He also played for a number of years in what's been referred to as a "journeyman career" where he was mostly off the bench for Seattle, Portland, Chicago, and Milwaukee. He of course went on to a career in broadcasting that has now ended. Don't worry though, his wife (if she'll end up being that) is a dermatologist. I guess that's good for him not only in terms of the money but any possible STDs he may have picked up along the way with these prostitutes.