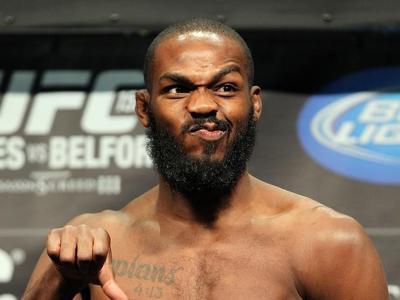 After testing postivie for a substance found in cocaine, UFC Champion Jon Jones has entered into a drug treatment facility. Or as we like to call it, our favorite place, rehab!

Jones going into rehab came as a quite a shock to many of his fans. After all. it came only days after he had just won his the light heavyweight championship in a title fight at UFC 182. Jones originally had received a drug test on December 4, 2014 and was found to be positive for benzoylecgonine, a metabolite found in cocaine and that is detectable in urine. Traditional boxing is known as the sweet science. Apparently in UFC the science is in the drug tests! Who can even pronounce this stuff? Any way this benzoylecgonine stuff can be found in urine for a much longer time than cocaine itself, which usually clears out of the system within 5 days. Although small amounts could be traced back to certain over the counter medications, we don't think that this is the case here. Yeah, its the real deal... definitely cocaine and not some over the counter medication. So off he goes into rehab with the support of his family. Jones has (of course) already apologized to many around him who he felt he had let down.

It was {modal http://www.foxsports.com/ufc/story/ufc-champion-jon-jones-tests-positive-for-cocaine-enters-rehab-program-010615}reported{/modal} that the test was conducted by the Nevada Start Athletic Commission and had been given right before one of his fights. However because benzoylecgonine is not banned in "out-of-competition" testing, Jones will therefore not be punished by the UFC. That's kinda like getting up after taking a count of 9. Whew!

Jones has been commended for his decision to go into rehab by all those around him (including the UFC.) In fact it doesn't seem like he will be suffering any worse losses, such as  from his sponsors (including a deal with Reebok that he had received as recently as December of 2014.) ...7-8-9... back up again!

Unfortunately, this is definitely not the first controversy that has surrounded Jones. Back in May of 2012 he was arrested for DUI. He ended up pleading guilty to the charges, paying a $1000 fine and had his license suspended for six months. Other controversies have surrounded his career and various fights in the UFC. However we don't understand how there could be any controversy in a sport that is called "ULTIMATE FIGHTING"! The ultimate conclusion here for Mr. Jones is, stay off the white powder, put on your white trunks and get back in the ring, champ... that is, right after you get out of rehab!

UPDATE: It's now been reported by {modal http://www.foxsports.com/ufc/story/jon-jones-exits-rehab-after-one-day-plans-to-attend-afc-title-game-this-weekend-011315}Fox Sports{/modal} that Jones checked into rehab on January 6, 2015 and checked out .... the next day! For all we know he was in there for less than 24 hours. Jones' mother has said, "he's continuing to research and educate himself on the issue now that he's back in public life". What? Is this some new type of R&R or something? He was out of "public life" for a matter of hours! He checked in, enjoyed a good meal, had a good night's sleep and split! Might as well have spent the night at a Motel 6 with a hooker. Ha! The benzoylecgonine was in Jones' system longer than his stay in rehab! Maybe that's why this guy is the champ. No matter how hard he gets knocked down, he always manages to get back up before he's counted out.