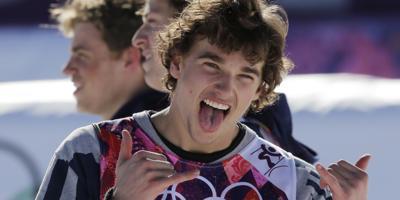 From winning a bronze medal for skiing at the winter Olympics this past February to causing $8,000 worth of property damage. This is the life of Nick Goepper.

Goepper was charged with criminal mischief on December 19, 2014 for committing several acts of vandalism back in August, allegedly  after suffering an "anxiety attack". The Olympian was in his hometown of Lawrenceburg, Indiana this past summer where he threw rocks at several cars after spiraling into some sort of depression. The prosecutor in the case Aaron Negangard said, "He was here, in Lawrenceburg. It was the summer, and there's not much going on in Lawrenceburg in the summer... He got into a depression."

Goepper has paid back all the victims for the damages he caused and if he stays out of criminal trouble for a year he will have the charges dropped.

And of course he has issued what we like to call a big fat apology, "I apologize to my family, fans, sponsors (especially!!!) and fellow athletes for my actions. Through this experience I have learned more about myself, including my responsibility as a role model athlete..."

Here we go again, another model Olympic athlete learning a lot from his experience showing a complete disregard for other people and their property.

Just stay out of trouble Nick, or you'll be left out in the cold, and we don't mean on the ski slopes.