Go Out Back And Cut Me A Switch! 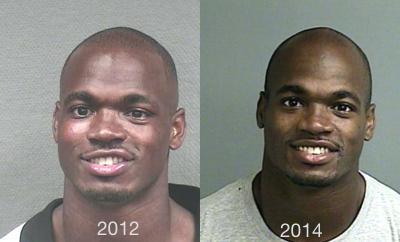 Minnesota Vikings star running back Adrian Peterson was indicted on September 12, 2014 by a Texas grand jury on charges of reckless or negligent injury to a child.

Our friends over at TMZ helped break the news by posting photos of Peterson's 4-year-old son with "slash-like" wounds on his legs. The prosecution alleges that Peterson used a branch of a tree (aka a switch -- thank God not an AK!) to beat his son repeatedly on his back, buttocks, genitals (ouch!!!), ankles, and legs.

Peterson was also also arrested back in July of 2012 by Texas cops and charged with resisting arrest. The arrest came after Peterson got into a scuffle with an off-duty Houston PD officer who was working security in a club. The club was closing, but Peterson still wanted to party. The story ended with him posting $1000 bond on the misdemeanor charge. Definitely a far cry from beating his own kid!

What we can't figure out is why he seems to be so damn happy in both of these mug shots!