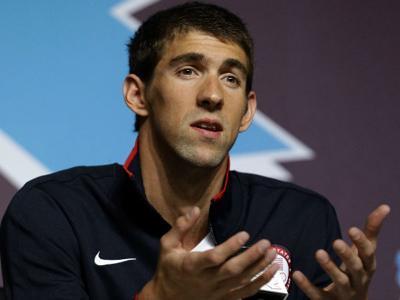 Phelps went Into Rehab after being arrested again for DUI. He got out just in time to spend the holiday weekend with his old girlfriend, Nicole Johnson. And what a weekend we're sure it was with Miss California. Our friends at TMZ Sports were the first to report that the Olympic icons stint in rehab was finally over.

Unfortunately due to his DUI incident, Phelps has been suspended from all swimming competitions for six months. He will not be chosen to represent the US at the 2015 World Aquatics Championship in Kazan, Russia. Russia? Vodka? Riiiight... probably for the best he'll be sitting this one out on the side of the pool, lest he find himself in more hot water.

Looks like Mr. Phelps was doing much better spending time indoors with his family on Thanksgiving. Good for you Michael. We know you are the master of the back-stroke. So here are some words of advice so you don't back-pedal: Next time -- call Uber.

UPDATE: On Friday December 19, 2014 Michael Phelps plead guilty to his DUI charge. He was originally sentenced to a year in prison, but the sentence was suspended in favor of 18 months on probation. Baltimore District Judge Nathan Braverman told Phelps, "You don't need a lecture from the court...If you haven't gotten the message by now, or forget the message, the only option is jail". I guess this is what happens when you are an 18-time gold medalist (the most decorated Olympian ever.)

Let us not forget though that Phelps was arrested in Novermber of 2004 (when he was only 19 years old) for driving under the influence of alcohol. Back then he also plead guilty and was sentenced to 18 months probation, fined $250, ordered to speak to high school students about drinking and driving and to attend a MADD meeting.

Phelps told media after leaving the courthouse, "I'm finding out a lot about myself and for this day, I'm happy to be moving forward... I'll continue to grow from this and continue on my path to recovery". We guess that is the best thing to say when decked out in a suit and those, umm, nice glasses. Really doing a lot of self-discovery uh? Speaking of discovery, how was it to find out that your one time girlfriend, Taylor Lianne Chandler was born "intersex" and lived as a boy until her teens. However by looking at her pictures, we are definitely not surprised!