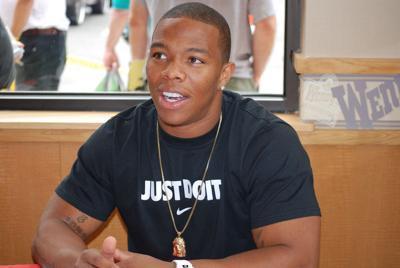 Our friends at TMZ were the first to release videos this year of a confrontation between Rice and his fiance Janay Palmer in a Casino in Atlantic City. Well, we wouldn't call that a confrontation, more like a poor woman getting her ass kicked by a professional football star. This lead to his indefinite suspension from the NFL.

Now, it's been {modal http://time.com/3609836/ray-rice-suspension-overturned/|title=}reported{/modal} that Rice has won an appeal against his indefinite suspension and will be reinstated into the NFL. However before he gets back onto the field he will need to find a team that will sign him. Lucky for him if he is not picked up he'll at least have a potential boxing career to fall back on.

But seriously people, give the guy break. If everyone who beat their wife would be out of a job the unemployment rate in this country would be out of control. Just sayin'.