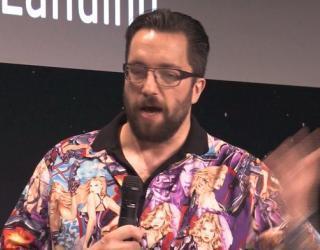 A rocket scientist doesn't always make headlines, at least not for the clothes he wears. Matt Taylor, a scientist for the Rosetta space probe project launched by the ESA to perform a detailed study of a comet, found himself in a bit of a controversy after having appeared on a web broadcast wearing a shirt "decorated with garish comic-book depictions of nubile, but not naked women". Really! Like geeky science guys have never done such things before.

The whole thing blew up on social media, trending with the hashtag #Shirtstorm and branding the poor guy a sexist pig who is ruining young girls' ambitions for choosing a career in science. We obviously disagree. We're sure these girls could easily get a position as his personal assistant.

A few days after the incident Taylor came out with an apology and toned down his dress for that public appearance. Step 1 screw up. Step 2 apologize. Welcome to IntoRehab.com!

Listen, we don't blame the guy. He's a rocket scientist nerd that probably still lives in his parent's basement. The guy landed himself in hot water with a bunch of feminists. But he also landed a space probe on a freaking comet! Cut the guy some slack.In any case, if his career in rocket science doesn't work out, maybe he could moonlight as the Fonz, {modal http://cdn.inquisitr.com/wp-content/uploads/2014/11/dr-matt-taylor-665x385.jpg}"heyyyyy"{/modal}

What we are more concerned about is the apparent movement of his hand in the picture above. Is this Taylor demonstrating how he is "the master of his domain?" Or is he just putting that female personal assistant in her place? *wooo-psshhh*