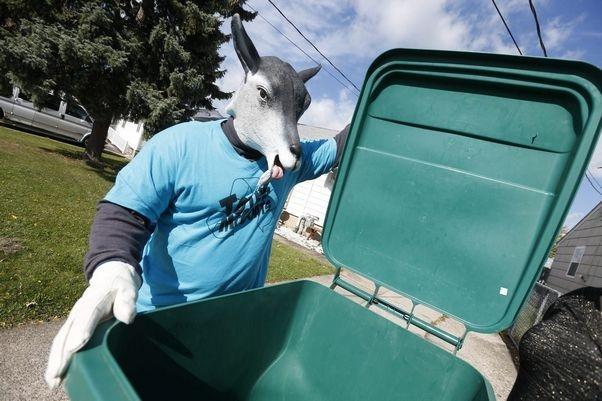 A former Niagara Falls heroin dealer who portrayed Niagara Falls recycling mascot “Totes McGoats” was ruled a success in a court-supervised drug rehabilitation program. This The Rest Of Us story is uplifting, and has great pictures,,, so how could we resist!

This is the story of James L Dolson, 50, of Niagara Falls, New York - heroin dealer and professional goat. He got busted in December 2014 for dealing heroin out of his car to a police informant. At the time he was acting as a heroin dealer but thinking like a goat. The charges were orginally a third-degree felony. But Niagara County Judge Matthew J Murphy III agreed to knock it down to a misdemeanor if Dolson agreed to rehab - which he did.

Fast forward to October 2015, where Dolson is doing so well in rehab that the City of Niagara Falls offered him the chance to don the goat head and portray the recycling mascot Totes McGoats in a public service campaign. Now Dolson was acting like a goat, but thinking like a man looking to straighten his life out. Well done, Billy...uh... errr... James!

His stint in rehab now complete, the court will pronounce final sentencing in January. Let's hope that the sentencing goes well and that Mr. Dolson can end up the hero... while still being a goat!