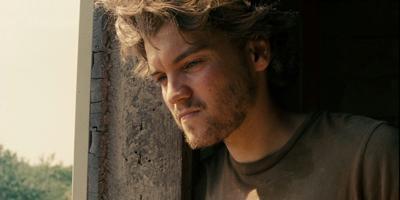 Here's the low-down. While spending time in Utah last month during the Sundance Film Festival, the "Lone Survior" actor according to police "consumed enormous amounts of alcohol." Then he allegedly beat the shit of out a female studio executive while at the Tao Nightclub in Park City, Utah. Or more specifically he "choked ... and dragged her across a table". But does it really matter at that point? Looks like Hirsch indeed was the "lone survivor" after that little incident. According to police he consumed so much alcohol that he "doesn't have any memory of what happened at the time of the allegations." How convenient... At least he remembered enough to get his ass into rehab.

Hirsch is now being charged with aggravated assault (which is a third-degree felony -- we write that, but does anyone know what these degrees really mean?) and intoxication (a class C misdemeanor -- degrees, classes -- yeah, we didn't go to college, so we don't know what the hell they're talking about.) With the assault charge Hirsch could end up spending five years in a Utah State Prison (sounds intense) and also have to pay a $5,000 fine. Any chance he could take just the fine? Or perhaps (C) None of the above? (we do remember something from school!)

Read the story {modal http://abcnews.go.com/Entertainment/actor-emile-hirsch-charged-assault-checks-rehab/story?id=28944454}here{/modal} to find out the "exact" details of the alleged assault. However the "Into the Wild" actor is said to be taking these allegations "very seriously and is devastated that any of this has occurred". We're sure he is, as his "wild" behavior could be taking him out of the wild and into jail!