As Seen on TV: The Not-So-Clean Life of Billy Mays 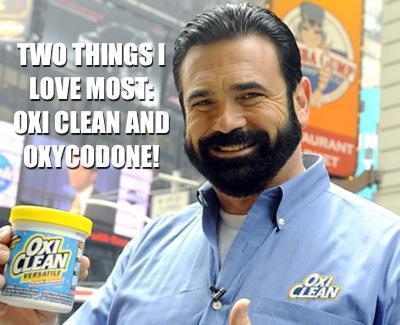 Pitchman Billy Mays was quite the salesman. With his over-the-top voice and can-do attitude, Billy could pitch almost anything and his loyal audience would buy. Get it while supplies last. But in the end not even a load of OxiClean could clean up Billy's act. Nicknamed "Pitchfork", we can now literally say, "Put a fork in 'im, he's done!"

The day before Mays died (back in June of 2009) he had complained of objects falling and hitting him on the head when the U.S. Airways flight he was on had a bumpy landing. But it wasn't death due to head injury that took Billy Mays. Mays died from a lethal arrhythmia caused by high blood pressure and heart disease brought on due to cocaine abuse. But wait, there's more! It was also discovered he had therapeutic levels of hydrocodone, oxycodone, tramadol, (all for hip pain, of course), Xanax and Valium in his system -- no wonder he was always so pumped! The only thing missing was Sneaky Pete wine! Mays was found unresponsive in his Tampa, Florida home. He was only 50 and if not for the drugs should have had plenty of years left to sell us plenty more must-have products.

Known for pitching OxiClean, Orange Glo, Zorbeez and countless other household items, Billy Mays truly believed in the products he sold. That's why he made such a huge fuss over each one. And that enthusiasm served him well as Mays was known to have run up over one billion dollars in sales in his short lifetime. What really made him famous, though, was his cheesy persona that eventually led to a cult-like following. Online video and photo parodies of Mays ranged from gangsta-rap imitations of his voice to pics of his famous, thick and glorious "Just for Men" dark facial hair. In good humor, Billy cashed in on it all and eventually starred in his own self-parody style commercials.

After graduating high school, Mays spent some time playing semi-professional football, but truly found his calling one day on an Atlantic City boardwalk when he discovered (and followed around) a Ginsu knife salesman. Impressed by the salesman's entertaining way with the crowd, Billy went on to develop his own style to "wow" a crowd. However, late in his career Mays was slightly overshadowed when a newcomer to TV commercials burst on the scene. Enter Vince Shlomi, who managed a more sarcastic and dramatic tone to win over audiences. Shlomi's ShamWow was even proven to work better than May's Zorbeez in a test done by a popular men's magazine. Was Billy intimidated by this new rival? Was the pressure too much for Billy? We may never know.

Billy's life may have been the real limited time offer, but today May's products live on in millions of American homes. We may never be quite as entertained or amazed with any infomercial without Billy, and we may have lost decades of $19.99 products with his passing. But his memory will live on every time we hear "But wait, there's more!" And here's a little more for you to enjoy. The video below is classic Billy Mays.