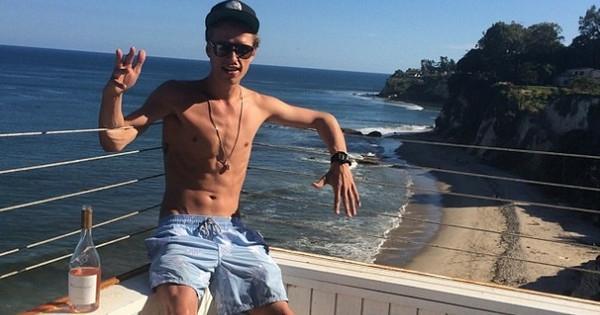 Conrad Hilton III, younger brother to infamous "famous for being famous" Paris Hilton, will be checking into rehab. The 21-year old hotel heir was spared jail by a judge in Los Angeles, despite calls from authorities to send him to prison. The accommodations may not match one of his family's penthouse suites, but it sure beats a bunk bed and a metal toilet.

Stories about this kind of character are always a challenge. He's not a Celebrity... what does he do? He's not The Rest of Us... we're not millionaires. So as heir to the Hilton Hotel fortune he must be a Business Leader... of sorts. But his behavior is all brat... and we don't have a category for that.

First, back in February 2015 Conrad III melts down and threatens passengers and flight attendants on an International flight. That got him sentenced to probation and community service, after he admitted to having smoked pot in the bathroom and threatened to kill one of the flight attendants. Although he did a voluntary stint in rehab after that first incident, four months later in June he made headlines again with a second arrest. This time it was for violating a restraining order his ex-girlfriend Hunter Salomon had against him. It appears young Mr. Hilton just can't quite keep it together. Brat.

Anyway, authorities arguing for a stiff sentence pointed out that Hilton had violated his probation by trespassing, failed drug tests, failed to complete three treatment programs and further left California without getting permission from his probation officer. The judge simply said Into Rehab for 90 days in a clinic for substance abuse treatment. Somehow we think this won't be his last visit to rehab... or the last time Conrad Hilton III graces the pages at IntoRehab! What do you think? Comment below.