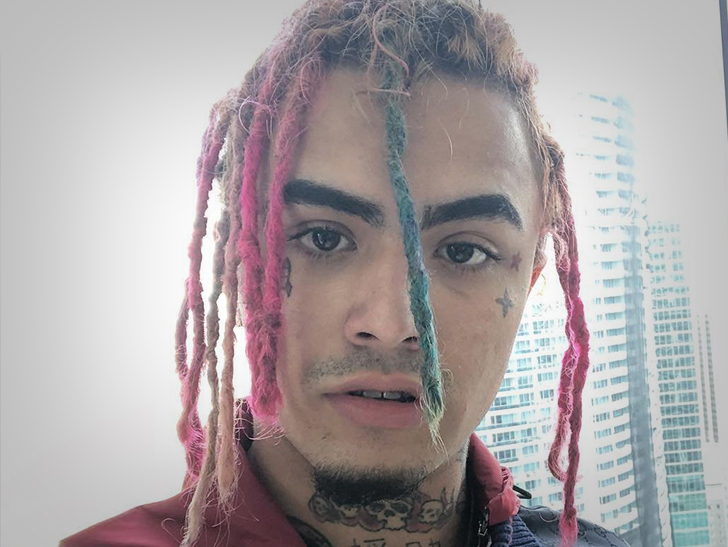 Lil Pump[1] was arrested Wednesday night at his home after he fired a gun, but the reason he discharged the weapon is in dispute ... TMZ has learned.

According to law enforcement, Pump's manager reported 3 men were jimmying the rapper's front door, trying to get into his San Fernando Valley home around 4 PM, and the suspects fired a gun once through the door. The manager was not at the house, but was relaying info to cops after speaking to Pump.

When police responded, they found a bullet hole in the front door. However, there were no suspects on the scene. Cops say the 17-year-old rapper had been smoking marijuana, and after talking to him they found holes in the intruder story.

Cops say the trajectory of the bullet hole shows it came from inside the home. Police returned a few hours later with a search warrant ... and found a handgun in the bushes below the balcony of Pump's apartment. The weapon was unloaded, but cops found ammo for the gun in the apartment. Cops felt Pump, not an intruder, had fired the gun into the door, and arrested him for discharging a weapon in an inhabited place.

There's more potential trouble for Pump's family -- police found marijuana in the apartment, and his mother was not home. We're told she's under investigation for endangering a minor and having an unsecured gun at home.

Pump is currently being held in juvenile detention.

Pump's camp insists there were indeed 3 men trying to get into the home, and he only fired out of fear they were about to gain entry to the apartment. They also say Pump believes he hit one of the suspects. We're

Not Such A "Tiny" Scheme

In August of 2012, actor Tommy "Tiny" Lister was taken into custody by US Marshals. His crime? A multimillion dollar mortgage fraud scheme.

Cole Hauser, who played the villain in the 2003 second installment of the franchise hit 2 Fast 2 Furious proves that life imitates the movies... and life imitates life. Not remembering or caring that another Fast & Furious alumni Paul Walker lost his life behind the wheel, Hauser was busted in LA for DUI after recklessly weaving on the 101 freeway. He was going too fast... and we'll bet his fans and his mamma are now furious.

Joey Bada$$ (a member of the Pro Era rap collective) was arrested on January 2, 2015 after allegedly punching a security guard in Australia at one of his concerts. The uppercut from down under!

This Is No Game - Kit Harington Into Rehab

In Game of Thrones someone was always getting screwed or killed... or both. Now Kit Harington gets screwed up, all stressed out and enters rehab before his career gets killed. No game here.

Born July 23, 1967, Phillip Seymour Hoffman made it to the ripe old age of 46. The cause of death was ruled accidental, though a guy has to know he's knocking on death's door when he's sitting in his apartment with 50 envelopes of heroin. Hoffman was found early morning on February 2, 2014, by a friend who had been trying to contact him. Hoffman still had a syringe hanging out of his arm.