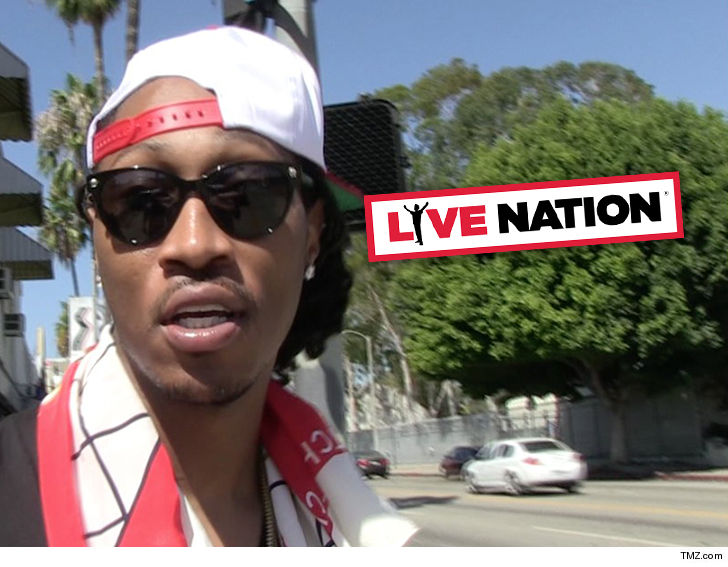 A couple fans claim they got jacked up from an alleged stampede at a Future[1] concert last year, and say the rapper and Live Nation are responsible ... so they're suing.

Catrina Washington and Shauntay Harris filed separate lawsuits against Live Nation and the Barclays Center in Brooklyn -- where the show went down last May -- for injuries they say they suffered after getting trampled in a stampede at the concert.

In the docs, Washington and Harris say fireworks were used during the performance, setting off a loud noise and causing a panic -- which allegedly led to them getting stomped all over as people scattered in chaos. Some folks thought gunshots had gone off.

For the record, the NYPD released a statement on this at the time. They said a loud metal-on-metal sound erupted when the stage was lowered too quickly at the end of the show -- insisting that, coupled with the sound of gunshots in one of the outgoing songs, is what caused the scare.

Future isn't named in the suits -- they name a rapper named Rome Fortune. We spoke to sources connected to the case, and we're told the suit will be amended to include Future. We're guessing Rome will be dropped 'cause he was nowhere near the Brooklyn show.

P. Diddy Arrested For Assault With A Deadly Weapon

On Monday June 22, 2015 Sean "P. Diddy" Combs was arrested after allegedly assaulting someone with a weight-room "kettle-bell" at a UCLA training complex. A kettle-bell is a small iron weight resembling a cannon ball with a handle used for exercise. Maybe Sean needs to exercise some restraint and get a handle on his temper!

Austin Powers and Celebrity Big Brother star Verne Troyer says he'll be entering rehab for alcohol addiction. After a 2-week stint in the hospital, the 48-year-old actor has confirmed to fans he would soon begin treatment for what has been a long-time battle. Even if it costs him "one millllion dollars" it's worth it!

Bill Gates Was Once Arrested - Really!

As a young man, Bill Gates took the fall... but it didn't hurt his career any. In fact, his little incident of youth may have even given him some street cred! And don't you just love how he smiled for his mug shot?